Do you believe Sarah Palin is dishonest? 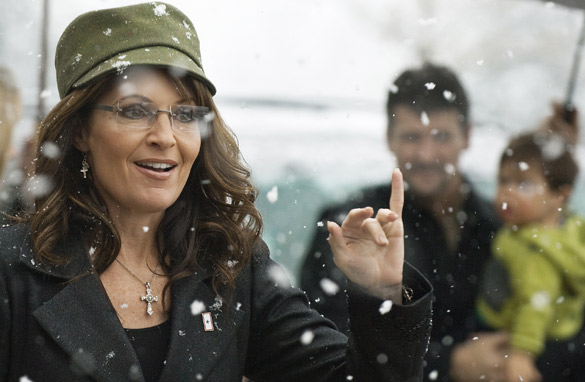 Sarah Palin has a problem with the truth - that's the explosive charge coming from John McCain's top campaign strategist.

Steve Schmidt tells CBS' "60 minutes" that Palin was dishonest as the Republican VP nominee, saying things that were "not accurate," which opened the door to criticism that she was "untruthful." Schmidt suggests such comments by Palin have done long-term damage to her public image.

For example - he talks about Palin's reaction to an ethics report from Alaska... which she claimed completely exonerated her. Schmidt said it clearly didn't... and that Palin's comments were the equivalent of saying "down is up and up is down."

Schmidt also says when John McCain tapped her to be his running mate, Palin announced: "It's God's plan."

There's more. The authors of a new book called "Game Change" describe how McCain's aides realized there were serious problems with Palin very quickly. Even after staffers gave Palin crash-course sessions on different topics after the GOP convention - she was still extremely uniformed. They claim she didn't understand why there was a North and South Korea... and regularly said Saddam Hussein was behind 9/11. Schmidt told Palin's tutor's in foreign affairs: "You guys have a lot of work to do. She doesn't know anything."

This from a woman who still may want to run for president in 2012 - and who has just signed on as a paid contributor to the F-word network.

Palin's people dispute the version of events in this new book - instead saying the governor has given "accurate" depictions of what happened in her own recent book.

Here’s my question to you: Do you believe Sarah Palin is dishonest?

END_OF_DOCUMENT_TOKEN_TO_BE_REPLACED

Are machines that "look under your clothes" the answer to airport security?

They see everything… I mean everything. But apparently that's okay with folks since that failed Christmas bombing plot... where a Muslim extremist tried to blow up an airplane bound for Detroit.
[cnn-photo-caption image=http://i2.cdn.turner.com/cnn/2010/images/01/11/art.body.scan.jpg caption=""]
A majority of Americans say they're willing to submit to screening at airports using full-body scanners.

A new CNN/Opinion Research Corporation Poll shows 79-percent of those polled say U.S. airports should use the technology...

There is some debate out there about the safety of the technology meant to detect bombs or weapons under passengers' clothing.

These scanning machines deliver small doses of radiation - equal to about one-percent or less of the radiation in a dental X-Ray - to millions of travelers. Radiation experts say it's such a small amount that the risk to individuals is next to nothing... but some expect the technology to result in a few additional cancer deaths.

Health question aside, more focus has been on the privacy issues.The ACLU says full body scans amount to a "virtual strip search."

The Obama administration says it plans to put hundreds more of these machines in U.S. airports and is urging other countries around the world to do the same.

Here’s my question to you: Are machines that can "look under your clothes" the answer to airport security?

END_OF_DOCUMENT_TOKEN_TO_BE_REPLACED

His days in politics may be numbered.

Senate Majority Leader Harry Reid - hugely unpopular at home in Nevada - is being skewered on the national stage for controversial comments he made about then candidate-Obama.
[cnn-photo-caption image=http://i2.cdn.turner.com/cnn/2010/images/01/11/art.harry.reid.jpg caption="Senate Majority Leader Harry Reid."]
In the new book "Game Change" - Reid is quoted as saying Obama could succeed as a black candidate in part because of his light-skinned appearance... and speaking without a "Negro dialect, unless he wanted to have one."

Reid has since gone on an apology tour - saying he's sorry to anyone who would listen: the president, plus several top African-American political figures... including members of congress, the head of the NAACP, civil rights leaders, etc.

President Obama accepted the apology "without question"... and top Democrats are defending Reid. No doubt they'd like the whole thing to just go away so the country can focus on issues like health care - instead of the party's own issues.

But several Republicans are calling on Reid to step down from his leadership position in the senate. They're comparing his comments to ones that cost former Republican Senate Majority Leader Trent Lott his LEADERSHIP job.

Meanwhile - Reid is facing an uphill battle just to keep his job as senator. A new poll shows only one-third of Nevada voters have a favorable opinion of him... 52-percent have a negative view of the four-term senator. And - that poll was taken before these comments surfaced.

Reid says he deeply regrets his "poor choice of words"... points to the work he's done for blacks... and insists he has no plans to step down.

Here’s my question to you: Is Sen. Harry Reid's political career over?