How satisfied are you with your job?

If you're lucky enough to have a job, a record number of you aren't satisfied with it.
[cnn-photo-caption image=http://i2.cdn.turner.com/cnn/2010/images/01/05/art.cashier.jpg caption=""]
A new survey shows only 45-percent of workers are happy with what they do - that's the lowest level ever recorded in more than 22-years.

Part of the reason, of course, is the worst recession since the Great Depression. But it's not just the recession. Worker dissatisfaction has actually been increasing for more than two decades.

Here's some of what this survey found:

Other key findings in this poll done by the "The Conference Board":

Economists say that if this trend in job satisfaction isn't reversed... it could wind up hurting innovation along with America's competitiveness and productivity. And with unemployment at levels we haven't seen in decades, it's difficult to imagine being able to address this issue any time soon.

Here’s my question to you: How satisfied are you with your job?

END_OF_DOCUMENT_TOKEN_TO_BE_REPLACED 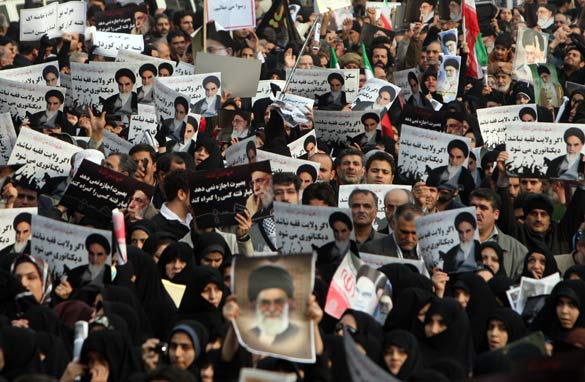 Supporters of Iran's regime took to the streets in Tehran last week in a show of force against the opposition, which it accused of being "pawns of the enemies." (PHOTO CREDIT: ATTA KENARE/AFP/Getty Images)

The answer to the nuclear standoff in Iran may lie in the bloody seven-month-long pro-democracy protests in the streets of that country.

Last week - Tehran saw some of the most violent clashes between demonstrators and government security forces in months... leaving at least eight people dead. Since then - hundreds of thousands of protesters have held rallies across the country.

Iranians are climbing to their rooftops at night and screaming "death to the dictator" and "death to Khamenei."

President Obama has said that the Iranian regime is engaged in "the violent and unjust suppression" of its citizens, who want nothing more than to exercise their universal rights. He says the regime is using the "iron fist of brutality" and governing through fear and tyranny.

The end of the year deadline passed and nothing happened. Secretary of State Hillary Clinton says the U.S. is open to further negotiations with Tehran - and that new sanctions are also possible. That's worked so well in the past.

But some suggest the best way to deal with the nuclear issue in Iran is to empower these democratic protesters - instead of offering economic and political incentives to the country's rulers and continuing endless negotiations. They say the U.S. should get behind the opposition... which is determined to topple the government.

Here’s my question to you: When it comes to Iran's nuclear ambitions, is supporting pro-democracy protesters a better option than negotiating with the government?

END_OF_DOCUMENT_TOKEN_TO_BE_REPLACED

Airline security: Is it time to start profiling?

In light of the botched Christmas day airline bombing - some say it's past time to start profiling passengers - especially from certain countries.
[cnn-photo-caption image=http://i2.cdn.turner.com/cnn/2010/images/01/05/art.body.scan.jpg caption="An airport staff member demonstrates a full body scan."]
The U.S. is demanding more careful screening for people who are citizens of - or flying from - 14 countries considered security risks... including Iran, Pakistan, Saudi Arabia and Yemen. The screening is to include things like full-body scanning and pat-downs, searches of carry-on bags and explosive-detection technology.

From the school of common sense comes the idea that it makes sense to more thoroughly screen passengers coming from countries where they may have been exposed to radical Islamic teachings.

But improved technology alone isn't the answer. The former head of security for Israel's airline El Al - which is arguably the most secure airline in the world - says we need better questioning of passengers. He suggests hiring well-educated, highly-trained agents who know what to look for. He says profiling isn't about singling out certain ethnic groups but about asking the right questions and spotting suspicious behavior.

Others claim that automatic profiling based on nationality doesn't work... terror suspect Richard Reid was British and Jose Padilla was Hispanic-American. But the fact remains that nearly all of the largest and deadliest terror attacks worldwide in the last 20 or 30 years have been carried out by young male Muslims from Arab countries in the Middle East. At what point does political correctness have to make way for our national security interests?

Oh, and President Obama's call for tougher screening procedures of passengers arriving in the U.S. from those countries deemed a security risk have been all but ignored in many places.

Here’s my question to you: When it comes to airline security, is it time to start profiling?