Should cell phone stores have to post radiation levels?

San Francisco could become the first city in the country to require radiation labels for cell phones.
[cnn-photo-caption image=http://i2.cdn.turner.com/cnn/2009/images/12/17/art.phone.store.jpg caption=""]
Mayor Gavin Newsom is backing a proposal that would require stores to post the radiation levels next to each cell phone - in a size at least as large as the price. They would also have to tell customers what the radiation levels mean.

So far - scientists don't agree whether cell phones pose a health hazard, and the Federal Communications Commission insists that all phones legally sold in the U.S. are safe.

But not everyone is so sure. One advocacy group says only recently have studies taken a look at radiation effects of people using cell phones for more than 10 years. They point to research in other countries that shows increased rates of brain and salivary gland tumors - especially on the side of the head where people use their cell phones.

In any case - there are 270 million cell phone subscribers in the U.S... and, if this becomes law in San Francisco - California often times leads the rest of the country when it comes to this stuff.

Here’s my question to you: Should cell phone stores have to post radiation levels?

END_OF_DOCUMENT_TOKEN_TO_BE_REPLACED

The clock is ticking down in Copenhagen with some suggesting the legacy of the two-week long climate talks will be nothing but chaos and failure.
[cnn-photo-caption image=http://i2.cdn.turner.com/cnn/2009/images/12/17/art.copenhagen.jpg caption="French President Nicolas Sarkozy delivers a speech in Copenhagen on the 11th day of the COP15 UN Climate Change Conference."]
Things pretty much ground to a standstill yesterday: Thousands of protesters clashing with police outside the meetings - While inside, negotiators expressed frustration that they would likely leave empty-handed. At best - a weak political agreement that wouldn't do much about combating global warming. One key meeting ran 18 hours behind schedule.

The plan was for the 115-plus world leaders to show up today and tomorrow and bargain over the final details... Not gonna happen. There are still no answers about how much to cut carbon emissions, how to prove the cuts are made and which nations should pay for these changes... along with a stand-off between China and the U.S.

Although some are still holding out hope - others are already talking about holding another international climate summit in Mexico City next summer - months ahead of schedule. One UN official says without a real deal in Copenhagen - it would be better to put off big decisions until the next summit.

Meanwhile after racing to wrap up business in the House, Speaker Nancy Pelosi is headed to Copenhagen, leading a 21-member bipartisan Congressional delegation. Pelosi - who's reportedly using at least two Air Force jets to get this posse to the climate summit - says the meeting is all jobs ... creating millions of new clean-energy jobs for Americans. Sure.

Here’s my question to you: Are chaos and failure the legacy of the Copenhagen climate summit?

END_OF_DOCUMENT_TOKEN_TO_BE_REPLACED 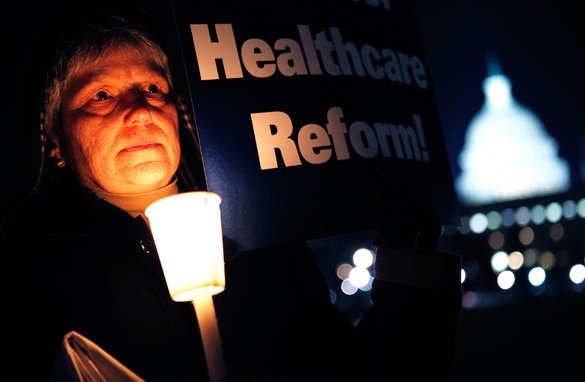 In an interview with ABC News - The president warns that without new health care legislation - people's premiums will go up and employers will add on more costs. Also - he says it's possible employers will start dropping coverage all together - because they just can't afford the increase in costs, somewhere to the tune of 25 to 30 percent a year.

Mr. Obama adds that the costs of Medicare and Medicaid are headed in an "unsustainable" direction... and threaten to bankrupt the government if nothing is done. The president says anyone who's worried about rising deficits or future tax increases has to support the bill - because otherwise, health care costs will just eat up the budget.

But not everyone is buying what the president is selling. Polls suggest Americans are increasingly skeptical - with support for health care reform falling... while the opposition grows stronger. One new survey shows that for the first time more people say they would prefer Congress do nothing on health care than those who want reform.

It's unclear if the Senate will be able to pass its bill by the president's deadline of Christmas. Among other things, moderate Democratic Senator Ben Nelson of Nebraska - a key holdout - says the question of abortion funding still hasn't been answered to his liking.

Here’s my question to you: Can the U.S. survive without health care reform?