Republicans more likely to be 'highly religious' than Democrats 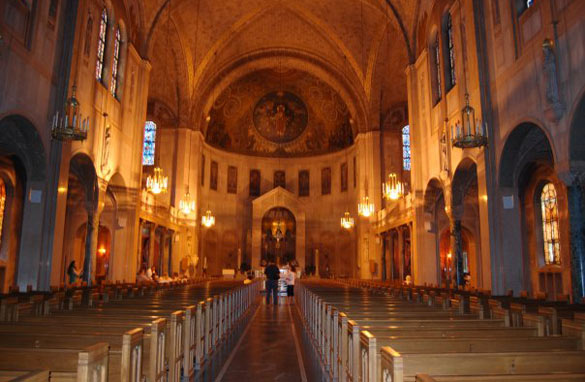 More proof that religion and politics are deeply connected in the U.S. - especially if you're a Republican.

A new Gallup poll shows the religious intensity of Americans is a strong predictor of whether they're Democrat or Republican. In a survey of nearly 30,000 people:

49 percent of Americans who call themselves Republicans say they're "highly religious"... meaning they go to church at least once a week and say religion is important in their daily lives. That's compared to 37 percent of Democrats who feel that way.

At the other extreme - only 26 percent of Republicans say they're "not religious" - meaning they never attend church and say religion isn't important... That's compared to 56 percent of Democrats.

When it comes to race - the poll shows that African-Americans are strongly Democratic - regardless of how religious they are. Also, Latinos skew more toward the Democratic party.

However, the religious connection is strongest among whites. Consider this: Whites who are highly religious are more than twice as likely to identify as Republicans rather than Democrats... and - exactly the opposite pattern emerges among whites who are not religious - by a 2-to-1 margin they are likely Democrats.

In all - about half of the white population in this country is both highly religious and leans toward the Republican Party.

With numbers like these - it's no wonder we hear Republican politicians invoking God and morality more often than the Democrats.

Here’s my question to you: What does it mean that Republicans are more likely to be "highly religious" than Democrats?

END_OF_DOCUMENT_TOKEN_TO_BE_REPLACED

It may not have been pushing the panic button but it was close.
[cnn-photo-caption image=http://i2.cdn.turner.com/cnn/2009/images/12/15/art.lieberman.jpg caption="Sen. Joseph Lieberman (I-CT)"]
President Obama summoned the Senate Democrats to the White House in a last ditch effort to get something they can call health care reform through the Senate without being embarrassed.

The president was expected to characterize this as the "last chance" to pass comprehensive reform. It's yet to be determined if it's either comprehensive or actual reform.

The Senate is racing to pass this thing by Christmas - whatever it is. The problem is they need 60 votes, and with Democrats, that means they have 60 opinions.

The biggest obstacle has been Senator Joe Lieberman of Connecticut - an independent who caucuses with the Democrats. Lieberman has threatened to join a Republican filibuster if the bill includes either the public option - or a provision allowing people older than 55 to buy into Medicare.

Lieberman couldn't even win his state's Democratic primary last time around - but he's threatening to block the whole enchilada here.

In 2006, Joe Lieberman ranked second in the Senate in the amount of money he took from the insurance industry. His state, Connecticut, has more than 22,000 people who work for health insurance companies.

In the last 10 years, Lieberman has taken more than a million dollars in contributions from insurance companies. One e-mailer called him "Senator Aetna."

Here’s my question to you: Is this the last chance ever for health care reform in the U.S.?

END_OF_DOCUMENT_TOKEN_TO_BE_REPLACED

Will the truth come out about the Bush administration?

But - it could still be years before the public gets to see any of this stuff. First they have to go through the National Archives - they decide which e-mails get released. Records from the Bush White House won't be available until 2014 - at the earliest.

A former spokesman for Bush says too much is being made of the discovery of these e-mails, and that misleading statements about the former administration show "a continued anti-Bush agenda." What he fails to mention is that there is a law that says records of the president must be preserved. But then the Bush White House often ignored laws when it was convenient for them to do so.

You suppose it's just coincidence that the 22 million e-mails from 2003 to 2005 cover some pretty significant periods of history - including the months leading up to the Iraq war, the firings of U.S. attorneys by the Bush administration and the announcement of a criminal investigation into the leaking of CIA officer Valerie Plame Wilson's name? Sure.

Here’s my question to you: Will the public ever get the truth of what happened during the Bush administration?