Why do some successful people throw it all away? 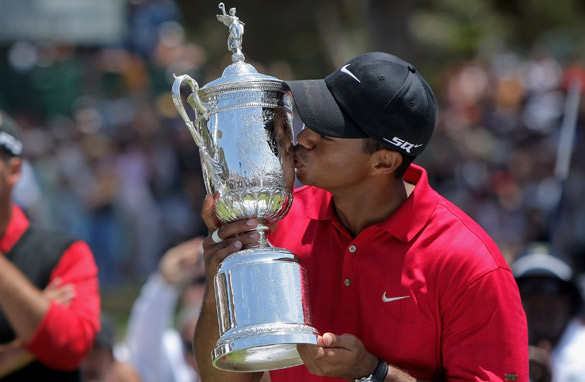 As the Tiger Woods scandal continues to grow like a Chia pet on steroids, here's the latest:

Woods makes $110 million a year from endorsements and tournaments... and in part he was selling an image. But that image has sustained more damage in the last two weeks than his Cadillac Escalade: One index that measures how celebrities influence shoppers shows Woods' ranking dropping from sixth to 24th place.

This makes Tiger Woods the latest in a long line of public figures - almost always men - who work hard to build successful lives and careers only to turn around and throw it all in a garbage can.

The website PoliticsDaily.com has a piece called "The Last Tiger Woods Question" that asks: "Why did he think he wouldn't get caught?" We all know the drill... from Bill Clinton to Eliot Spitzer, Rudy Giuliani, John Edwards and South Carolina Governor Mark Sanford... people who are so controlled and accomplished in other areas of their lives, yet risk it all.

Experts say a lot of times these men simply don't think - that lust makes people irrational. Or, they think they're smarter, or somehow different or the woman in question is special, or they know other men who got away with it and think they can too. Wrong.

Here’s my question to you: Why do some successful people choose to throw it all away?

END_OF_DOCUMENT_TOKEN_TO_BE_REPLACED

Congress, and the American public for that matter, would like to know how uninvited guests can simply walk into the White House and attend a state dinner hosted by the president. Seems like a reasonable question.
[cnn-photo-caption image=http://i2.cdn.turner.com/cnn/2009/images/12/09/art.rogers.jpg caption="White House Social Secretary Desiree Rogers planned the state dinner that Tareq and Michaele Salahi crashed."]
Trouble is, no one wants to tell them. Except for the Secret Service, who willingly admitted their role in the screw up.

The intruders - they weren't guests - the Salahis - don't want to talk. And if they're subpoenaed by Congress to testify they say they plan to invoke the Fifth Amendment. The one that protects against self-incrimination. If, as they claim, they were invited - they weren't - why would they do that?

But the bigger question is why the White House is providing cover to social secretary Desiree Rogers. The president cites executive privilege in saying this woman who was in charge of the dinner, that's her job, doesn't have to testify.

Now we're not talking about a key policy adviser to the president here. We're talking about a secretary whose job it is to be in charge of stuff like dinner. It's not like she has access to the nuclear launch codes, if you know what I mean.

But the president doesn't want Rogers to have to go in front of Congress and explain why she didn't do her job. Which was dinner. Why not? People have been fired for less. But she's being shielded from any embarrassment not because of "executive privilege," but because she's an old pal of Obama's from Chicago. This is change?

Here’s my question to you: Does President Obama look like Pres. Bush when he allows social secretary Desiree Rogers to avoid testifying before Congress?