Remember the argument against cracking down on illegal immigration that went: "Illegal aliens come here to do the jobs Americans won't do?" Well, guess what? Americans are doing them... and in greater numbers than ever before.
[cnn-photo-caption image=http://i2.cdn.turner.com/cnn/2009/images/12/01/art.home.depot.jpg caption="Day laborers wait in front of a Home Depot in Los Angeles."]
USA Today reports that a growing number of American citizens are headed to street corners and parking lots of home improvement stores to find day-labor work - jobs usually done by illegal aliens.

A UCLA professor of urban planning says it's happening most often in areas where hot construction markets have collapsed - and there are lots of unemployed construction workers without stable work. He estimates that the proportion of American born day laborers has at least doubled in the last three years. Back in 2006, they made up seven percent of the day labor workforce.

Some of the places seeing an increase in U.S. citizens seeking day-labor jobs include Tucson, Arizona, Arlington, Virginia, and Los Angeles.

Experts say the day labor pool is becoming much more ethnically diverse. Whites, African-Americans and Mexican-Americans are all joining the ranks - competing for work painting, laying bricks or landscaping. And it's a trend that will only get worse once unemployment benefits run out and more people are laid off.

Nationally, the unemployment rate is 10.2 percent... and is expected to get worse before it improves. A recent report shows jobless rates increased in 29 states and the District of Columbia in October. Michigan leads the pack with over 15 percent unemployment, followed by Nevada, Rhode Island, California and South Carolina.

Here’s my question to you: What does it mean when a growing number of Americans are seeking day-labor jobs?

END_OF_DOCUMENT_TOKEN_TO_BE_REPLACED

Why do celebrities who travel via private jet tell us to save the environment?

The hypocrisy of some celebrities knows no bounds.

The London Times has a piece called "Taking the private jet to Copenhagen" - a reference to the upcoming international climate summit. This report highlights actors, musicians, politicians and other so-called "green" celebrities who have fleets of jets, multiple homes, and on and on - leaving carbon footprints as they travel through life that would put a dinosaur to shame.
[cnn-photo-caption image=http://i2.cdn.turner.com/cnn/2009/images/12/01/art.gwyneth.suv.jpg caption="Actress Gwyneth Paltrow is pictured behind the wheel of an SUV."]
For example:

All of the above mentioned celebrities are active to a greater or lesser degree in urging the rest of us to fight global warming.

Here’s my question to you: Why do celebrities who travel around in private jets want to tell the rest of us how to save the environment?

END_OF_DOCUMENT_TOKEN_TO_BE_REPLACED

Should Republicans be trying to sell political 'purity'? 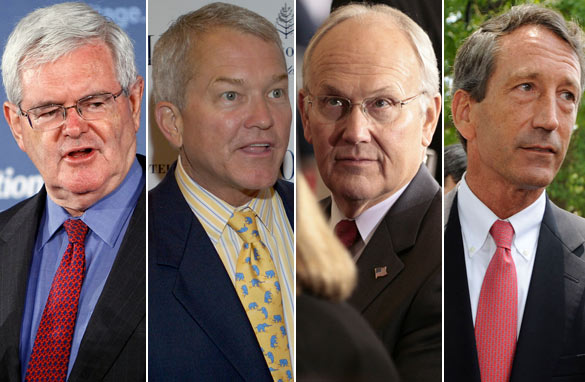 It seems the Republicans can't agree on the party's proposed "purity test" which would bar financial support for candidates who don't meet 8 of 10 tests on social and fiscal issues...

Many Republicans - even some who claim they'd pass the purity test - say it's a bad idea because the party should offer a larger tent. With a Democratic White House that's growing more unpopular, and with Republicans hoping to pick up congressional seats next year, they say this purity test could just cause more inter-party fighting.

Plus it seems pretty hypocritical. Here are a few examples of Republican "purity":

Of course - Democrats do this stuff too, but they're not the ones trying to sell political purity to the public.

Here’s my question to you: Do Republicans suffer a credibility problem trying to sell the idea of "purity"?