Reality TV gone too far when it comes to W.H. 'crashers'? 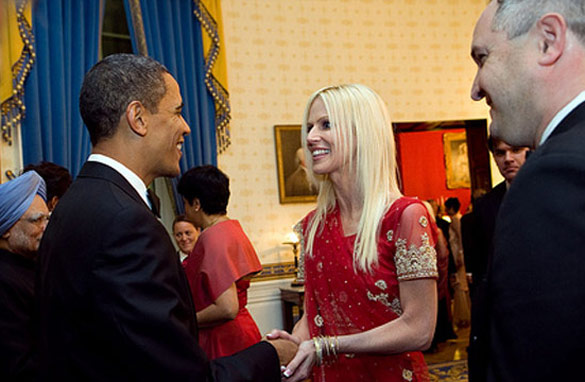 The White House "crashers" are just the latest example of why reality TV may have entered dangerous territory.

Michaele and Tareq Salahi made it past Secret Service and inside the White House for President Obama's first state dinner without being invited. They met the President and the Vice President.

President Obama insists he still has "full confidence" in the ability of the Secret Service to protect his family. But the agency has said it's "deeply concerned and embarrassed" - as it should be.

Some lawmakers want criminal charges brought against the couple. That's an excellent idea.

There are reports the couple wants in the neighborhood of half a million dollars for an interview about their story. They deny it.

And the couple is being considered for the cast of the reality TV show "The Real Housewives of D.C." They had television cameras following them around the day of the state dinner.

Another grab at 15 minutes of fame by people who would live their entire lives unnoticed otherwise. Remember the Colorado father of the so-called "Balloon Boy?"

This loser was trying to get media attention for his own reality show when he made up a story about his six-year-old son being carried away in a home-made helium balloon. He agreed to plead guilty to a felony charge.

Reality TV has given these people the idea that anyone can be a celebrity - and some are committing dangerous, and potentially criminal acts, just to get on the tube.

And to think it all started with a fat, naked guy wading around in the water looking for fish on a CBS program called "Survivor." In retrospect, it seems pretty harmless.

Here’s my question to you: Has reality television gone too far when it comes to the White House "crashers"?

Brian from Atlanta writes:
These "crashers" should have criminal charges filed… This is a test case. If this is not handled properly, the nut jobs will come pouring out of the woodwork doing whatever they want without consequence. I surely hope these folks are locked up and star in the San Quentin version of "Survivor."

Calhoun writes:
Reality TV is like any other business: it supplies based on demand. The issue is not with the genre, but rather, what our society finds to be entertaining.

Ed writes:
Suggesting that this is nothing more than "reality TV going too far" is the liberal media's way of deflecting blame away from the White House. The real story here is the Obama White House is amateur hour.

K. from Wisconsin writes:
Absolutely. Reality TV is only encouraging these misfits. It’s far past time to stop publicizing already dysfunctional people for the sake of "entertainment."

Matt from New York writes:
I don’t think reality TV has the ability to go too far. There will always be brainless people out there who eat that nonsense up. Personally, I agree with your statement that it's much easier to produce. But look at it, it's just stupid. There is no talent, no point, no BRAINS behind it at all.

Dianne writes:
Here's a reality TV show for you, Jack: Auction off the clothing and jewelry worn to the party by the White House party crashers and donate that money to a soup kitchen near their home. Now put the couple on house arrest (their house, not the Obamas') and sentence them to work in the kitchen for 2 meals a day at that local soup kitchen for a year. Maybe they would learn an important lesson about reality. That's a show I'd watch.