Should the wealthy pay more taxes to send more troops to Afghanistan?

Some top Democrats think the wealthy should have to pony up more taxes in order to pay for a troop increase in Afghanistan.

Levin says richer Americans have done "incredibly well,” and that it's important to pay for a troop surge instead of increasing the federal debt.

Obey says that people making $400,000 or $500,000 per year should be asked to pay as much as 5 percent of their incomes, while lower earners might pay a smaller amount - down to 1 percent.

Obey says if we don't increase taxes, the war in Afghanistan will "bleed every dollar in the budget away from any other initiative." Unless of course the government cut spending elsewhere. Hah!

First they wanted to tax the rich to pay for health care reform. Now they want to do it to pay for more troops for war. This administration also plans to increase the top income tax rate. Pretty soon the rich won't be.

The White House suggests it could cost as much as 40 billion dollars per year to send 40,000 additional troops into Afghanistan. President Obama is expected to announce his decision in the next few weeks. He will meet with his national security team tonight - again.

Here’s my question to you: Should additional taxes be levied against wealthy Americans to pay for more troops in Afghanistan?

Interested to know which ones made it on air?
END_OF_DOCUMENT_TOKEN_TO_BE_REPLACED

What can Pres. Obama learn from Sarah Palin? 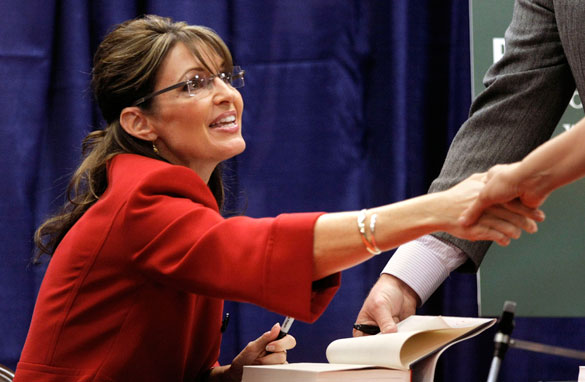 With President Obama now below 50 percent approval for the first time, New York Times columnist Maureen Dowd suggests the president could learn "a thing or three" from Sarah Palin.

Dowd writes that with the former V-P candidate back on the trail for her book tour, she clearly hasn't boned up on anything and "she still has that Yoda-like syntax."

But Dowd warns it would be foolish for the Democrats to write off Palin. She says that although President Obama is highly intelligent and likable - he's not connecting on a gut level with the public. She suggests he might be getting too bogged down in pragmatism and the details of legislative compromises.

Dowd writes that the president, who she calls the "Cerebral One," might want to take lessons from Palin, the "Visceral One."

She writes: "Palin can be stupefyingly simplistic, but she seems dynamic. Obama is impressively complex but he seems static. She nurtures her grass roots while he neglects his. He struggles to transcend identity politics while she wallows in them. As he builds an emotional moat around himself, she exuberantly pushes whatever she has, warts and all..."

Meanwhile – it's clear Sarah Palin is saying something people want to hear. She sold 300,000 copies of her memoir on the day of its release - one of the best openings ever for a nonfiction book, easily topping people like Hillary Clinton.

As for President Obama - the Gallup Daily Tracking poll puts his approval rating at 49 percent - the first time he's dropped below 50 percent since taking office.

Here’s my question to you: What can President Obama learn from Sarah Palin?

Interested to know which ones made it on air?
END_OF_DOCUMENT_TOKEN_TO_BE_REPLACED

The Catholic Church wants Democratic Congressman Patrick Kennedy to stop taking communion - due to his support of abortion rights.

The bishop of Providence, Rhode Island, says he told Kennedy in February 2007 that it would be "inappropriate" to keep receiving the Catholic sacrament.

That request is suddenly in the spotlight as the Church gets more involved in the health care debate, particularly regarding the issue of abortion. Kennedy - the nephew of this nation's only Catholic president, John F. Kennedy - revealed the bishop's request to a newspaper over the weekend.

Just last month - Kennedy had criticized the bishops for threatening to oppose the overall health care bill if it didn't include abortion restrictions. The Church called Kennedy's position "unacceptable" and "scandalous."

Rep. Kennedy is not the first Catholic politician to want it both ways. In 1984, Democratic vice-presidential candidate Geraldine Ferraro came under attack from the church for not backing its position on abortion.

At 30 percent, Catholics are the largest single religious group in Congress. Look for the Church to keep up the lobbying pressure on these lawmakers. When it comes to the health care bill - that could include not only abortion, but issues like immigrant rights and stem cell research.

Here’s my question to you: Should the Catholic Church deny communion to public figures who support abortion?

Interested to know which ones made it on air?
END_OF_DOCUMENT_TOKEN_TO_BE_REPLACED