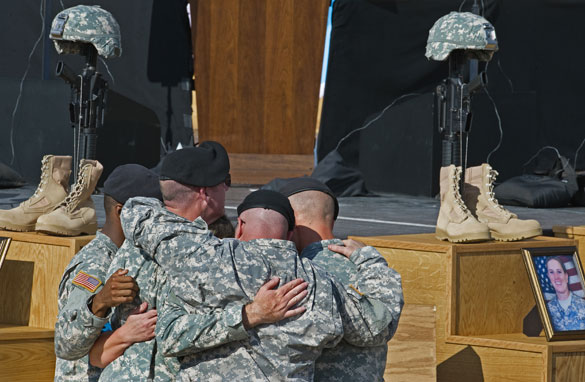 
Anthony in New Jersey
As long as this country pacifies illegal immigrants, embraces Islamic sensitivities and handles our minorities with kid-gloves for fear of legal repercussions, they will use our system to gain advantage. We're becoming increasingly predictable because of this political correctness. Those not willing to assimilate use our tolerance as an advantage to undermine us. While trying to be the freest country on earth, we're being too tolerant and risk destruction from within. Our authorities can't even use profiling as a legitimate means of policing. Thus you have the atrocity that was Fort Hood.

Joe in Colorado
Jack, What a dumb question. We could have maybe prevented this if we had an SS Nazi type organization in this country. What is next? Detention camps for all Muslim Americans and people with "poor judgment" performance reviews?

Harrison in Mobile, Alabama
Yes, but had they done so, instead of talking about how this could have been prevented, there would be a ton of complaints from the general public and the media about how the military is racist, they profile, they hate Muslims, etc, which would almost certainly be coupled with unnecessary congressional hearings and widespread artificial outrage at said Military practices...which would have been a small price to pay given what the alternative turned out to be, eh Jack?

Jafsie
The investigation by Homeland Security has just begun, yet Congress is already barreling forward and politicians on both sides are spouting their rear-view wisdom. And now, you're inviting CNN viewers to weigh in with their verdicts as well? Please, Jack, stop encouraging Americans to mouth off on yet another subject that they know next to nothing about.

Carole in West Palm Beach
Jack, This tragedy should have been averted. Is everyone color blind? There were "red flags" all over this field: e-mails to an extremist cleric? Poor performance reviews from his fellow mental health professionals? PowerPoint presentations extolling the" virtues" of suicide bombers? A loner? Where's Nancy Drew when you need her?