How confident are you the government can prevent a swine flu epidemic? 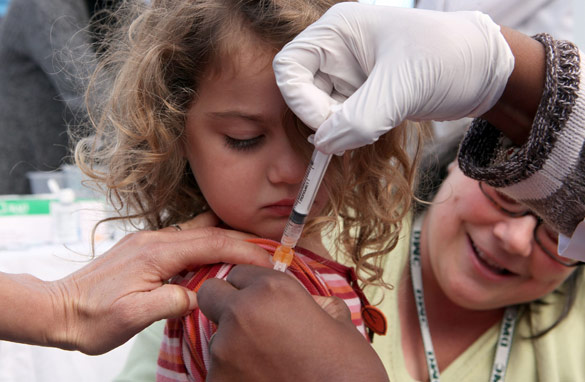 With the swine flu now widespread in 48 states, Americans are starting to lose confidence in the government's ability to prevent an epidemic.

A new CNN/Opinion Research Corporation poll shows only 51-percent of those surveyed are confident the government can stop a nationwide epidemic of the h1n1 virus. That number is down from 59-percent in August.

49-percent say they're not sure the government can prevent an epidemic; and that's up from 40-percent this summer.

The poll also shows only a little more than half of those surveyed think the government and private industry can provide enough swine flu vaccine for everyone who wants it. That number is virtually unchanged in the last few months.

Meanwhile mothers with children younger than 18 are especially skeptical about the government's abilities here. Perhaps not surprising when you consider that children are some of the hardest hit by this virus; and a lot of people still can't get their hands on the vaccine.

Health officials say there are more than 41 million doses of the H1N1 vaccine available.

Here’s my question to you: How confident are you the government can prevent a swine flu epidemic?

END_OF_DOCUMENT_TOKEN_TO_BE_REPLACED

Will Congress ever pass a Constitutional amendment imposing term limits?

It's an idea that's long past due and it will probably never happen...

A group of Republican senators is proposing a Constitutional amendment to set congressional term limits - 12 years for the Senate and six years for the House.
[cnn-photo-caption image=http://i2.cdn.turner.com/cnn/2009/images/11/11/art.demint.jpg caption="Sen. Jim DeMint (R-SC)"]
Senator Jim DeMint of South Carolina says real change will never happen in Washington until there's an end to the era of permanent politicians. DeMint says lawmakers have been re-elected about 90 percent of the time over the last 20 years - because the system favors incumbents.

We all know the drill: Some spend decades in Washington, get into bed with the special interest groups that feed their campaign coffers and forget all about the people they're supposed to represent.

And we've heard this before... Republicans who gained control of the House in 1994 promised to pass congressional term limits, but once they were in power, they failed to deliver. The Supreme Court later ruled term limits were unconstitutional - which is why this group of senators is trying to change the Constitution.

In order to pass, two-thirds of the House and Senate would have to approve the amendment - along with three-fourths of the 50 states.

As for the power hungry politicians, they say they don't like to mess with the Constitution; and that Americans should be able to vote for whoever they want.

But I would be willing to bet if this idea was put to a vote of the people it would win going away.

Here’s my question to you: What are the chances Congress would ever pass a Constitutional amendment imposing term limits?

END_OF_DOCUMENT_TOKEN_TO_BE_REPLACED

Should U.S. military Muslims be forced to fight other Muslims?

The suspect in the Fort Hood shootings - that left 13 dead and wounded 42 others - had asked the military to let Muslims claim conscientious objector status when it comes to going to war against other Muslims.
[cnn-photo-caption image=http://i2.cdn.turner.com/cnn/2009/images/11/11/art.hasan.jpg caption="Fort Hood shooting suspect Maj. Nidal Malik Hasan"]
The Washington Post first reported on a slide presentation Army Major Nidal Hasan, who is Muslim, made as a psychiatric resident at Walter Reed back in 2007.

It was supposed to be about a medical topic, but instead Hasan lectured about Islam, suicide bombers and threats the military could face from Muslims conflicted about fighting Muslims in Iraq and Afghanistan:

"It's getting harder and harder for Muslims in the service to morally justify being in a military that seems constantly engaged against fellow Muslims."

Hasan was set to leave soon for Afghanistan, and a relative says he had asked not to be deployed.

But the Washington Post is now reporting that's not true - an Army official says Hasan never formally requested to leave the military as a conscientious objector or for any other reason.

Meanwhile there is no exact count of how many Muslims are in the U.S. military. The Pentagon lists about 3,500 Muslims out of 1.4 million service members. But officials say that number is probably low since disclosure is voluntary.

Nonetheless, this seems to be a real issue that might continue to present itself with U.S. troops still in Iraq; and potentially tens of thousands of additional troops being sent to Afghanistan.

Here’s my question to you: Should Muslim members of the U.S. military be forced to fight against other Muslims?