Should Congressman William Jefferson get 33 years in prison?

When the feds found $90,000 in Congressman William Jefferson's freezer - you had to figure something wasn't kosher. And sure enough... this slime ball had turned bribery, fraud and money laundering into a fine art.
[cnn-photo-caption image=http://i2.cdn.turner.com/cnn/2009/images/11/10/art.wm.jefferson.jpg caption="Congressman William Jefferson (D-LA)"]
The former Democratic congressman from Louisiana was convicted in August on 11 federal corruption counts - including bribing a Nigerian vice president on a telecom contract.

Federal prosecutors now want Jefferson locked up for as long as 33 years - which would be the harshest prison sentence ever for a member of Congress.

The Justice Department insists that his "stunning betrayal of public trust" is deserving of what could be a life sentence for this 62-year-old. And they want him to start serving his sentence immediately after Friday's hearing. He's now free on bond.

Of course, Jefferson's lawyers argue he should get a prison term of less than 10 years. After all, what's eleven federal convictions among dirty congressmen?

They say the government's recommendation is out-of-line with previous sentences for congressional corruption; and that it doesn't take into account the positive side of Jefferson's life and career. Wonder what that is.

Former Congressman Duke Cunningham, Republican of California, was given an eightyear sentence in 2006 for taking more than $2 million in bribes - along with tax evasion and fraud.

Maybe if the system began to come down harder on jerks like Jefferson who violate the trust placed in them by the people, future would-be scoundrels would think twice about filling their freezers with ill-gotten lettuce.

Here’s my question to you: Should 62-year-old convicted Congressman William Jefferson get 33 years in prison?

END_OF_DOCUMENT_TOKEN_TO_BE_REPLACED 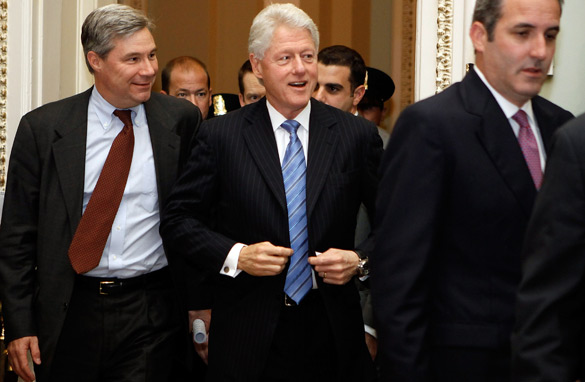 Bill Clinton is accompanied by Sen. Sheldon Whitehouse (D-RI) (L) as he heads into the Senate Democratic Caucus luncheon in Washington, DC. Clinton was on the Hill to talk to lawmakers about passing health care reform legislation through the Senate. (PHOTO CREDIT: GETTY IMAGES)

The Democrats are sending in the big guns to try and make health care reform a reality.

Former President Bill Clinton told Senate Democrats earlier today that there's no perfect bill and that the worst thing to do is nothing, adding: "It's important to act, to move, to start the ball rolling."

After the closed-door meeting, Clinton said he told the senators that the U.S. economy won't be able to survive much longer without health care reform.

If one person knows what's at stake for President Obama and the Democrats, it's Bill Clinton. His administration's failure to pass health care reform back in the early 90s is seen as one of the big reasons for the Republican takeover of Congress in 1994.

And now that the House has passed its bill, there's no question the Senate Democrats will need to find some consensus when it comes to things like the public option and abortion funding.

Meanwhile a new poll suggests it's not just members of Congress who need some persuading here.

The Gallup poll shows 41 percent of Americans say a new health care bill would make the U.S. health care system better in the long run; but 40 percent say it would make things worse. The poll suggests people are even more negative about reform when it comes to their personal situation.

What we don't know yet is how much the public's opinion matters. The insurance companies, large pharmaceutical companies and other powerful forces have a vested interest in defeating this legislation. And if the vote was taken today, they would probably win.

Here’s my question to you: Can Bill Clinton save health care reform?

END_OF_DOCUMENT_TOKEN_TO_BE_REPLACED

Call it CBS News versus the White House.

CBS reports that President Obama intends to give General Stanley McChrystal most - if not all - of the 40,000 troops he's asking for in Afghanistan. They say the president has tentatively decided to send four combat brigades plus thousands of more support troops.
[cnn-photo-caption image=http://i2.cdn.turner.com/cnn/2009/images/11/10/art.mcchrystal.jpg caption="General Stanley McChrystal is the U.S. Military commander in Afghanistan."]
According to CBS, the troop buildup would last for about four years - until the Afghan military doubles in size. This surge would mean the number of U.S. troops would grow from the current 68,000 to about 100,000 by the end of the president's first term.

But the White House insists the CBS story is false. They call reports that the president has made a decision about Afghanistan "absolutely false." They say Mr. Obama still hasn't received or reviewed "final options" with his national security team.

So - who's telling the truth here? It comes down to the word of the Obama White House against the network of Edward R. Murrow and Walter Cronkite.

Of course... CBS News also saw Dan Rather step down in 2005 after apologizing for a report that questioned President George W. Bush's National Guard service. Rather said the report was based on false documents.

Meanwhile the Associated Press seems to support the CBS story, saying President Obama is nearing a decision to add tens of thousands of additional troops to Afghanistan - but not the 40,000 that McChrystal wants.

Some officials dub that likely troop increase McChrystal Light since it would fall short of the general's request.

Here’s my question to you: CBS News says nearly 40,000 additional troops will be sent to Afghanistan. The White House says the story is false. Whom do you believe?