Should Obama heed Gorbachev’s advice on Afghanistan and prepare to withdraw troops?

Former Soviet President Mikhail Gorbachev who has "been there, done that" when it comes to Afghanistan says that instead of sending more troops, President Obama should prepare to withdraw U.S. forces. It's advice Mr. Obama may want to consider as he weighs sending up to 40,000 additional troops into that eight year old war.
[cnn-photo-caption image=http://i2.cdn.turner.com/cnn/2009/images/11/09/art.gorbachev.jpg caption="Former Soviet Union leader Mikhail Gorbachev ."]
You see, the Soviets occupied Afghanistan in 1979. A decade later, they picked up their toys and went home after intense opposition from Afghan fighters, backed by the U.S. and Pakistan.

13,000 Soviet soldiers - and more than a million Afghans - died during those 10 years. At the time that Gorbachev withdrew his forces - he called the occupation of Afghanistan a "bleeding wound."

Gorbachev now says the Soviets talked about sending more troops back then - but decided against it. Instead, he says they chose to work on domestic development in Afghanistan and promoting reconciliation between the various factions in the country.

Gorbachev acknowledges that terrorism can't be ignored... but that the overall emphasis should be on dialogue and ultimately a withdrawal of troops.

Meanwhile President Obama has been holding meetings for over a month now with top military and foreign policy advisers about what to do next in Afghanistan. Maybe some day he'll make up his mind.

Last month was the deadliest in the eight year war for U.S. troops.

Here’s my question to you: Should President Obama heed former Soviet Pres. Gorbachev’s advice on Afghanistan and prepare to withdraw U.S. troops?

END_OF_DOCUMENT_TOKEN_TO_BE_REPLACED

Do you think Ft. Hood shootings were an act of terrorism?

The Army might have had a terrorist in its midst and not even known it. As the days pass, there are more and more signs that Army Major and psychiatrist Nidal Hasan - who slaughtered 13 people and wounded 42 others - was an Islamic extremist who was sympathetic to al Qaeda and had strong objections to U.S. policy in Iraq and Afghanistan.
[cnn-photo-caption image=http://i2.cdn.turner.com/cnn/2009/images/11/09/art.hasan.jpg caption="Maj. Nidal Malik Hasan, the suspect in last week's Fort Hood mass shooting."]
Independent Senator Joe Lieberman says the shootings could have been a terrorist attack; and that he'll launch an investigation into whether the military could have stopped it.

Lieberman, who chairs the Homeland Security and Government Affairs Committee, says there's evidence Hasan was a "self-radicalized, home-grown terrorist." If that's true, last week's killings could be the worst terror attack on U.S. soil since 9/11.

Witnesses say at the time of the shootings Hasan shouted "Allahu Akbar" - Arabic for "God is great" - something terrorists have used as a battle cry.

Then there's this: Hasan apparently attended the same Virginia mosque as two of the 9/11 hijackers in 2001 - at a time when a radical spiritual leader preached there.

Finally, former classmates complained repeatedly about what they saw as Hasan's anti-American views. One says Hasan gave a presentation that justified suicide bombing and talked about how Islamic law trumped the U.S. Constitution.

The Army isn't ruling out terrorism - but is concerned about a possible backlash against Muslim soldiers.

Here’s my question to you: Do you think the Fort Hood shootings were an act of terrorism?

END_OF_DOCUMENT_TOKEN_TO_BE_REPLACED

How much does the House health care bill matter? 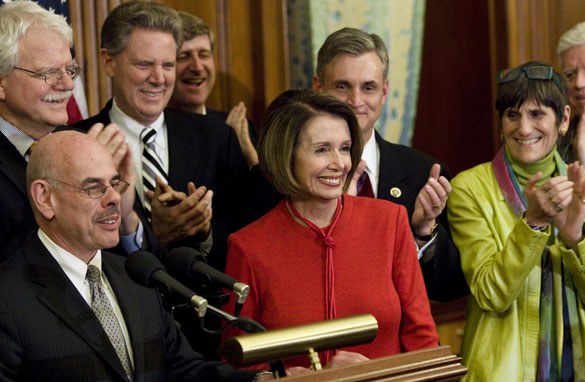 House Democrats clap for Speaker of the House Nancy Pelosi (D-CA) during a press conference after a vote on health care. The House passed the health care reform bill 220 to 215 after a late night vote. (PHOTO CREDIT: Brendan Smialowski/Getty Images)

Don't cancel your existing health insurance just yet. Health care reform narrowly passed the House late Saturday night; but it's a long, long way from a done deal in the Senate.

House Speaker Nancy Pelosi is comparing this legislation, which passed by a scant five votes, to the passage of Social Security and Medicare; and President Obama says he looks forward to signing it into law by the end of the year.

One top Senate Republican, Lindsay Graham of South Carolina, is already declaring the bill "dead in the water."

Here's why: What happens to the so-called public option? Harry Reid still doesn't have the votes to pass that. And Republicans along with Independent Joe Lieberman are promising a filibuster if the public option stays.

The House bill costs hundreds of billions of dollars more than the latest Senate version; which means the Senate could wind up cutting expensive parts of the bill - like a requirement for employers to provide coverage. Another huge difference between the bills is how to pay for reform.

And what about abortion funding? At the last minute, the House passed an amendment that prohibits federal funds from going to insurance plans that offer abortion coverage. For millions of women - this could mean the house bill breaks the promise that "if you like your current health care you can keep it."

This much you can count on. Anytime the House votes late on a Saturday night after last minute changes were made and the promise by Pelosi is broken to post the bill online for 72 hours before a final vote, it ain't good.

Here’s my question to you: How much does the House health care bill even matter?