While Al Gore warns about the dire consequences of global warming, apparently one of those consequences is that he's filling his pockets - big time. The New York Times reports that few stand to profit as much from the green energy revolution as the former vice president does.
[cnn-photo-caption image=http://i2.cdn.turner.com/cnn/2009/images/11/03/art.-gore.jpg caption=""]
Critics say he could become the world's first "carbon billionaire." They suggest Gore is profiteering by promoting government policies that would drive billions of dollars into companies he's invested in. Some say he's fattening his wallet by what they call alarmism and exaggerations about global warming.

Gore insists that he's just putting his money where his mouth is. He says his investments are consistent with what he's been advocating for years.

The Times reports that Gore has invested millions of dollars in environmentally friendly energy ventures; things like carbon trading markets, solar power, electric vehicles and waterless urinals. Actually - we could probably do without those.

The former vice president has also given away millions to a nonprofit he started and to another group focused on climate change. Plus he's invested in areas like technology and media with no ties to the environment.

Bottom line here: Al Gore is not a lobbyist, and has never asked the government for funding or a specific law that would directly benefit one of his investments. But, he has advocated relentlessly for policies that would get the country off using coal and oil... while investing in companies that could make this happen.

Here’s my question to you: What is Al Gore’s real motive when it comes to global warming?

END_OF_DOCUMENT_TOKEN_TO_BE_REPLACED

As President Obama weighs whether to send as many as 40,000 additional troops to Afghanistan - the government we're supporting over there continues to become more of a joke. President Hamid Karzai has been declared the winner in the disputed election; after his chief challenger Abdullah Abdullah dropped out of the runoff that would have happened Saturday.
[cnn-photo-caption image=http://i2.cdn.turner.com/cnn/2009/images/11/03/art.karzai.jpg caption="Afghan President Hamid Karzai addresses a press conference at the Presidential Palace in Kabul."]
Abdullah was calling for the resignations of top election officials to avoid the kind of fraud that happened in the first election. Didn't happen.

Faced with a transparently phony situation, President Obama is calling for "a new chapter" of improved governance in Afghanistan now that Karzai's re-election is complete. He really doesn't have much of a choice.

Mr. Obama says that Karzai has to take on the rampant corruption and drug trade - which he hasn't done so far and has helped the Taliban make its comeback.

With each new development our presence in Afghanistan looks more and more futile. And it's no surprise that Afghan political experts along with regular citizens there say the elections have undermined the people's faith in democracy.

Meanwhile President Karzai vows that he will stamp out corruption and work with the Taliban. But even the Taliban isn't buying that - calling the election a fraud manufactured by Washington. Just what we need as our troops continue to die in that godforsaken place and more of them could be going there soon.

Here’s my question to you: Should the U.S. place its faith in Afghanistan’s President Hamid Karzai?

END_OF_DOCUMENT_TOKEN_TO_BE_REPLACED

What will NY, NJ and VA races say about national political landscape? 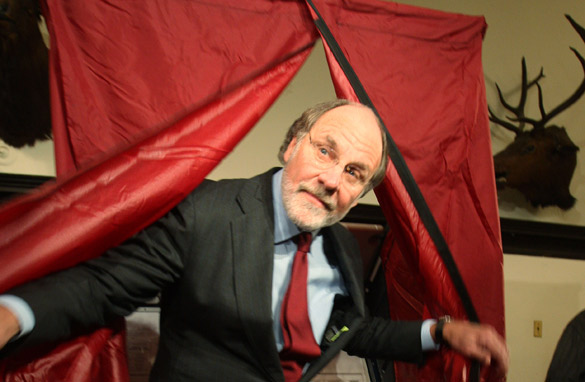 Ordinarily a race for an obscure congressional seat in upstate New York would go by unnoticed - even by half the people who live there. But not this time. Same for the governors' races in New Jersey and Virginia.

Because of a growing disaffection with some of President Obama's policies, a lousy economy, two wars, and the failure of the Democratic Congress to do much of anything worthwhile... there's an abnormal amount of interest in how the people in those three races are likely to vote.

With congressional midterms coming a year from now - you can bet the spin doctors from both parties will be working late into the night to interpret the results in New Jersey, Virginia and New York in the best possible light for their party.

Governor Jon Corzine of New Jersey is in a nail-biter with a former Republican prosecutor whom Corzine implied is fat. The fat guy might win.

In Virginia - President Obama has made a significant political investment in the Democrat candidate for governor - but all the polls leading up to today indicate the Republican is going to win.

And that obscure upstate congressional race in New York has become a contest between an ultra-conservative and a Democrat. The Republican dropped out. She wasn't conservative enough.

Here’s my question to you: What will today's races in New York, New Jersey and Virginia tell us about the national political landscape?