Fair to make rich pay so much for health care reform?

It would only affect 0.3 percent of tax filers and is expected to raise $460 billion over 10 years.

But, as always, there's a catch... This new tax isn't indexed to inflation like other income taxes are, so it would continue to ensnare more families and more small business owners as time goes on.

Some tax experts say it's a mistake to call on only the rich to pay for services that are used by all. One economist who advised President Bush says: "This gives the impression that (health care) is only worth having if someone else pays for it."

Meanwhile this isn't the only tax that President Obama has planned for the wealthy. He wants to increase the top marginal income tax rate from 35 percent to almost 40 percent.

I guess cutting government spending is out of the question. Socialism takes another step forward.

Add to that the fact that most Americans are already seeing their health insurance premiums, deductibles, co-pays, etc. go up.

Here’s my question to you: Is it fair to make the rich pay for so much of the cost of health care reform?

END_OF_DOCUMENT_TOKEN_TO_BE_REPLACED 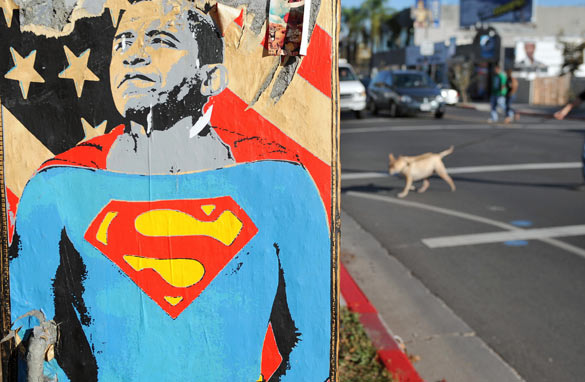 A poster of then President-elect Barack Obama as Superman is seen on November 5, 2008 on Melrose Avenue in Los Angeles, California, one day after Obama won the election. (PHOTO CREDIT: GABRIEL BOUYS/AFP/GETTY IMAGES)

It's been one year since President Obama defeated John McCain and rode into office promising "change we can believe in."

So - what has he done in the first year?

Some say Mr. Obama's biggest accomplishments have been keeping the financial crisis from becoming worse... and improving America's image abroad.

Democrats credit the $787 billion economic stimulus package with rescuing the economy... although Republicans call it a big waste... and with nearly 10 percent unemployment, the country is still waiting for the jobs to come back.

The president and Congress have spent most of the first year wrestling with health care reform and if we get anything at all - it's probably going to fall far short of meaningful reform.

Meanwhile President Obama has done nothing to regulate Wall Street or close the nation's borders. The deficits are beyond absurd. The wars continue - as does most of the government secrecy left over from the Bush administration.

And the president's policy of engaging our enemies hasn't produced many results yet when it comes to countries like Iran and North Korea.

Even his liberal supporters don't think he has delivered on issues like don't ask-don't tell, climate change and education reform.

You could make the argument Superman couldn't have done this stuff in a year either.

Here’s my question to you: One year after the election, how's President Obama doing?

END_OF_DOCUMENT_TOKEN_TO_BE_REPLACED

If swine flu vaccine shortage, should Gitmo detainees get it?

Terror suspects at Guantanamo Bay will soon be offered the swine flu vaccine. While millions of Americans can't get their hands on this stuff - the 200 plus detainees at Gitmo will have the option of being vaccinated against H1N1. 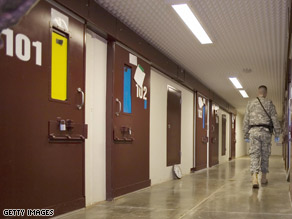 The Pentagon says it's because people held in detention facilities are at higher risk for the pandemic. The soldiers at Gitmo will be offered the shots before detainees and others on the base. Similar plans are reportedly under way to vaccinate inmates in federal prisons.

You could make a pretty good argument that people should be outraged by this. Democratic Congressman Bart Stupak is calling on the Pentagon to reconsider its decision, saying detainees shouldn't get preferential treatment.

Meanwhile people in this country are waiting in line for hours to get themselves and their children vaccinated. The CDC had hoped to have 40 million doses of the swine flu vaccine available by the end of October - but manufacturing delays forced them to revise that number down to 28 million doses. Meantime the virus is spreading across the country - particularly hitting children, teens and pregnant women. Another 19 youngsters died in the last week.

A couple weeks ago - I mentioned how one of the largest pediatrician's offices in Manhattan couldn't say when or if the swine flu vaccine would be available for a co-worker's toddler. Well - still nothing. There's such a limited supply that they're only offering it for a few select kids with underlying conditions. But Gitmo detainees can get it.

Here’s my question to you: If there is a shortage of the swine flu vaccine, should terror suspects at Guantanamo Bay get it before millions of Americans?