As Sarah Palin prepares to release her memoir next month, it seems like so much of her life is already an open book. Palin - who quit as Governor of Alaska in the middle of her first term - has been having a nasty public battle with the father of her grandson.
[cnn-photo-caption image=http://i2.cdn.turner.com/cnn/2009/images/10/29/art.palin.jpg caption=""]
Levi Johnston - the former boyfriend of Palin's daughter, Bristol - says Sarah Palin describes her son Trig, who has Down syndrome, as "retarded." Johnston also claims to know a lot more about what went on in the Palin household - so presumably, there is more tabloid trash to come.

Sarah Palin is pushing back - calling Johnston's claim "inflammatory," and saying Trig is their "blessed little angel" who knows it and is lovingly called that every day of his life.

Palin also suggests that Johnston - who is preparing for a photo shoot with Playgirl Magazine - is desperate for publicity. Sort of like Sarah Palin is.

Meanwhile - a new poll suggests Palin may have run her course with the American public. Only 29-percent of Americans think she's qualified to be president. 71 percent - including nearly half of all Republicans - say she's not.

And, 51-percent of Americans have a negative view of her.

Here’s my question to you: What are Sarah Palin's chances in 2012?

END_OF_DOCUMENT_TOKEN_TO_BE_REPLACED

Should people who witness a crime face jail for failing to report it?

California police now say as many as 20 people were present at the gang rape of a 15-year-old girl outside a high school homecoming dance last weekend. 10 people were involved in an assault in a back alley at the school that went on for more than two-and-a-half hours. 10 people stood around and watched without calling 9-1-1 to report it. Police say some witnesses took photos, while others laughed.
[cnn-photo-caption image=http://i2.cdn.turner.com/cnn/2009/images/10/29/art.richmond.jpg caption="Police say a student at Richmond High School was gang raped outside during a homecoming dance."]
California law makes it illegal not to report a crime against a child, but the cutoff is 14-years-old. Since the victim in this case is 15, cops say they can't arrest the spectators. The law needs to be changed immediately.

Meanwhile this horrific rape of a young girl follows that brutal beating death caught on video of a 16-year-old honor student in Chicago.

That case has been hampered by the refusal of witnesses to come forward. These kids in Chicago also stood by and watched this teenager murdered - beaten to death in broad daylight - and did nothing.

Experts say the reason crimes aren't reported could be a social phenomenon known as "the bystander effect" that means the larger the number of people involved in any situation, the less will get done...

One famous case happened in New York in the 1960s - where people watched or heard a serial killer rape, rob and murder a woman named Kitty Genovese. At the time, one witness said: "I didn't want to be involved."

Here’s my question to you: Should people who witness a crime, like the gang rape of a 15-year-old California girl, face jail for failing to report it?

END_OF_DOCUMENT_TOKEN_TO_BE_REPLACED

What exactly are we doing in Afghanistan? 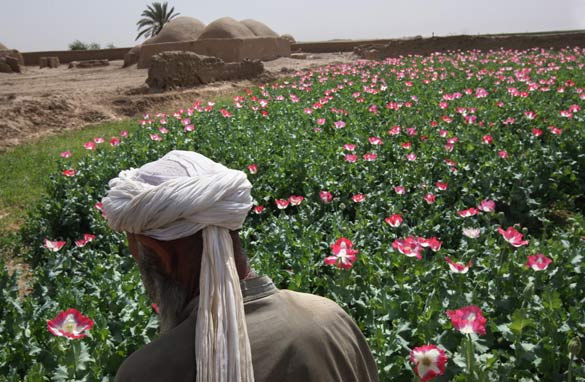 An Afghan opium farmer stands next to his poppy field in southwest Afghanistan. U.S. Marines based there are battling a Taliban insurgency funded in large part by the drug export trade. (PHOTO CREDIT: John Moore/GETTY IMAGES)

As U.S. troops suffer the deadliest month so far in the war in Afghanistan, it seems worth asking exactly what our strategy is.

Turns out the U.S. is now set to pay Taliban fighters to switch sides and stop killing our troops. Supporters say the buyout idea is meant to separate local Taliban from their leaders,which is similar to a program used to win over insurgents in Iraq.

Many of these fighters owe no particular allegiance to the Taliban, but rather support them for a paycheck and because there is no other way for them to support their families.

But experts say that although the program may have some success, the U.S. is ultimately buying a "very temporary allegiance." You don't have to be an expert to figure that out.

Speaking of payments, The New York Times reported yesterday that the brother of Afghan President Hamid Karzai is a suspected major player in the country's drug trade - and has been on the CIA payroll for eight years.

This makes no sense. U.S. officials talk about how Afghanistan's opium trade threatens the stability of the country, pays for the Taliban fighters' war effort against us, and corrupts government officials.

Ahmed Wali Karzai denies that he has anything to do with drug trade, and says he doesn't take payments from the CIA. I think I will choose to believe The New York Times.

Officials also say there's evidence that the president's brother helped create hundreds of thousands of phony ballots and set up dozens of so-called ghost polling stations for the August election.

If it's true, no wonder Harmid Karzai won; and if this stuff doesn't make you scratch your head, it should.

Here’s my question to you: What exactly are we doing in Afghanistan?