Where has the Obama 'magic' gone? 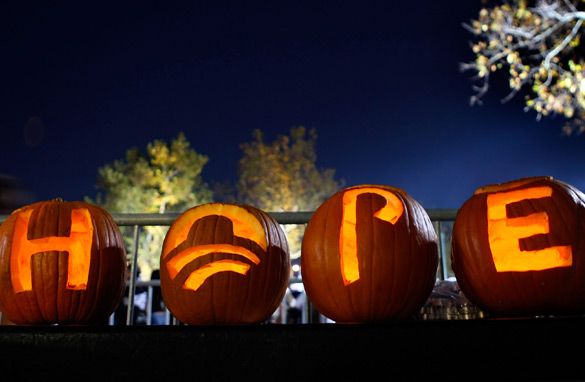 Some Democrats are calling it the "Obama hangover."

Even with President Obama on the campaign trail, at fund-raising events and taping TV ads for many state and local candidates - it seems like the electricity of the 2008 campaign is a distant memory.

The Los Angeles Times reports how much tougher it is to get people fired up to volunteer and vote Democrat this time around. And, as President Obama tries to address health care, the economy and the wars in Afghanistan and Iraq - some of his decisions may not sit well with voters at the local level.

A lot of eyes are on the races for governor in New Jersey and Virginia; and a congressional race in upstate New York's 23rd district.

With election day a week away - things aren't looking so hot for Democrat Creigh Deeds in Virginia... One new poll shows him trailing Republican Bob McConnell by 11 points. Meanwhile - White House officials have been complaining about the quality of Deeds' campaign... gee, think they're trying to distance themselves from him?

Meanwhile - Pollsters say it's conservatives who are most energized this time around. And Republicans are already describing any victories in these elections as a referendum on President Obama... claiming it could be a sign of things to come in next year's midterms.

Here’s my question to you: When it comes to upcoming state and local elections, where has the Obama "magic" gone?

END_OF_DOCUMENT_TOKEN_TO_BE_REPLACED

An international study is expected to show that people who use cell phones frequently face a higher risk of getting brain tumors. The British Newspaper "The Daily Telegraph" reports on a decade-long study of nearly 13,000 people in 13 countries - overseen by the World Health Organization.
[cnn-photo-caption image=http://i2.cdn.turner.com/cnn/2009/images/10/27/art.cell.phones.jpg caption=""]
According to the paper, the report says a definitive link couldn't be proven; but several of the studies conducted seemed to show an increase in various kinds of brain cancers.

The report is due out before the end of the year, but lawmakers here in the U.S. have already been focusing in on the issue. Democratic Senator Tom Harkin has said he's concerned no one has been able to prove cell phones don't cause cancer, and promises his committee will take a look at that question. Harkin says it reminds him of the nation's experience with cigarettes - and how it took decades to prove that they caused lung cancer.

If the lobby for the wireless phone companies is as powerful as the tobacco lobby, it could be a long debate. And cellphones are much more widely used than cigarettes.

It's estimated 275 million people use them in the U.S... and four billion worldwide.

But so far, research hasn't established a definitive link between cell phones and different kinds of cancer, including brain tumors. But the Telegraph says this study contains evidence there is a link.

Here’s my question to you: Are you concerned about possible health risks associated with cell phone use?

END_OF_DOCUMENT_TOKEN_TO_BE_REPLACED

What's the right strategy in Iraq and Afghanistan?

The wars in Iraq and Afghanistan seem to be blowing up in President Obama's face at the same time. This month has become the deadliest for U.S. troops in Afghanistan since the 2001 invasion. Two insurgent attacks there have killed eight more U.S. troops, bringing the October death toll to 58. This follows two helicopter crashes yesterday that killed 14 Americans.
[cnn-photo-caption image=http://i2.cdn.turner.com/cnn/2009/images/10/27/art.baghdad.jpg caption="An Iraqi woman and her two little boys survey the damage after a suicide truck bomb struck in central Baghdad over the weekend. The near-simultaneous twin suicide vehicle bomb attacks were the deadliest in the violence-wracked country in over two years."]
President Obama is trying to decide whether to send up to 40,000 additional troops to Afghanistan. He is scheduled to meet with the Joint Chiefs of Staff on Friday.

Here's something else for the president to consider: A foreign service officer and former Marine Corps captain who fought in Iraq has become the first U.S. official known to resign in protest over the war in Afghanistan.

Matthew Hoh says he no longer knows why we're fighting; and he thinks the U.S. is asking its troops to die for what is a far-off civil war.

As for Iraq - those two weekend bombings in Baghdad killed at least 155 people, including 20 children, and wounded more than 500 others. Al Qaeda in Iraq has claimed responsibility for these attacks - the deadliest in that country in more than two years.

The bombing of government buildings in Iraq raises some serious questions about Iraq's security and the national elections planned for January. Earlier this week - President Obama repeated America's commitment to withdrawing our troops.

Here’s my question to you: When it comes to Iraq and Afghanistan, what's the right strategy?