$250 for seniors to make up for no Social Security increase?

President Obama wants to send $250 dollars to 57 million Americans - including seniors, veterans and people with disabilities. 2010 will mark the first year that Social Security benefits don't increase in more than three decades. The cost-of-living adjustment for Social Security, in effect since 1975, is pegged to inflation; but since inflation was negative this year there won't be any increase. 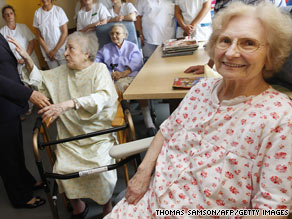 The president says, "we must act on behalf of those hardest hit by this recession," and points to seniors and others who have seen their retirement accounts and home values plummet.

The $250 equals about a two percent increase in benefits for the average person getting Social Security.

It's backed by some key members in Congress. But other lawmakers don't think this is a good idea. The formula used to determine Social Security doesn't call for an increase.

Congress approved a similar $250 payment earlier this year as part of the economic stimulus package.

If it happens, it will cost an estimated $13 billion over 10 years. Mr. Obama says he wouldn't allow the payments to come out of the Social Security trust fund - which is already running in the red. But the president didn't say where the money would come from. Apparently he's open to borrowing the money. Which means it would be added to the deficit.

Here’s my question to you: Should the government pay seniors $250 to make up for no increase in Social Security next year?

Nick from Longmont, Colorado writes:
Jack, Definitely yes! The reason why anti-trust laws exist in the first place is to prevent greedy companies from controlling a market. And for years, we have been watching the health insurance industry sticking it to employees and employers alike. Ending this exemption will create the competition required to lower premiums. That, and a strong public plan.

Cliff from East Rockaway, New York writes:
Jack, Of course, health insurance companies should be stripped of antitrust protection. The health of our citizens is a public good and a right, not a privilege. If utility companies need to justify rate increases, why don't insurance companies, or for that matter, hospitals?

Keith from Lancaster, Kentucky writes:
How funny these people are, now they are threatening to do what Republicans have been saying would bring real competition to the insurance companies and save the American people billions. So I would say these are empty threats. After all, their main focus is more control over the people. The ability to buy insurance across state lines is the answer, not a Rube Goldberg project from a bunch of liberals.

Chris from California writes:
Absolutely. It is about time someone has the guts to fight back against the insurance companies. I have been waiting and waiting to see someone, anyone, stand up for the American people instead of the lobbyists and insurance companies. Could this finally be it? I hope so!

Paul writes:
Jack, Yes! I bet many folks did know about this insurance company situation with antitrust exemption. Your program makes my day.

A. writes (on missing boy/balloon story):
Been stuck at Denver airport due to this kid’s stupidity. Would recommend a good spanking for the kid and fine for the parents. Not happy!