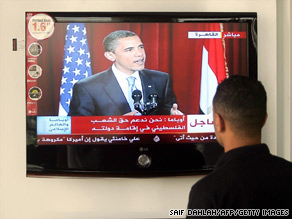 Carla from Alabama writes:
It is better to be loved than hated, Jack. Our country has seen the results of having a president whose my-way-or-the-highway attitude and refusal to even converse with other world leaders caused him to be despised in the international arena. We now have a president who listens to what other world leaders have to say, and who accepts responsibility for his actions. I hope the world continues to like Obama. Wouldn't it be nice to have real allies again?

Pete from Augusta, Georgia writes:
Jack, In today's dangerous world, we need to remember the words of Don Corleone in The Godfather (paraphrased: "Your enemies will become my enemies. And then, they will fear you.") A president who is liked in the global arena only emboldens adversaries to challenge him, while fear causes hesitation in consideration of severe consequences for provocative acts. Likability fades quickly but fear lingers.

Gordon from New Jersey writes:
Both, although I'd rather he be respected than feared. Bush wanted to be feared, but his fiasco in Iraq destroyed our military credibility. However, there has been a big change since Obama. Pakistan really is fighting the Taliban now, whereas before they were merely pretending to. What's scary, is all this talk of pulling out of Afghanistan just as the Pakistani's show up to fight on our team.

Jan from Punta Gorda, Florida writes:
I think a little patience is called for when it’s said that nothing has changed just because some foreign countries "like" President Obama. Like most of us citizens, they are just getting to know him. Also like us, they may like the "change", not just in skin color but also in attitude. However, we all are waiting to see if he is a man of integrity that we can trust and it takes time to build trust.

Diane writes:
Jack, How correct you are! The president is not supposed to win a popularity contest, rather gain respect. If fear is part of what it takes to get respect, so be it.

Leslie writes:
Jack, "Like" is a start. Bush was neither feared nor liked. Let's get an international consensus, get the world back on our side again and then kick butt.