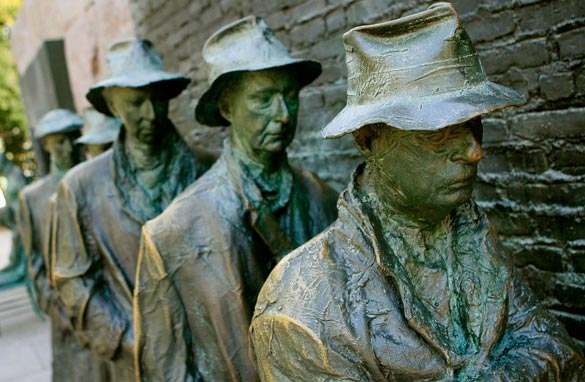 The United States may be headed for Third World status... according to a new study by two economists and endorsed by a Nobel laureate.

It suggests that President Obama may be repeating mistakes made during the Great Depression, which caused the worst economic collapse ever. The authors say the administration's plan to put hundreds of billions of dollars into the economy will undermine it in the long run, hurt long-term growth and possibly delay recovery by years. They say the U.S. could fall from First to Third World status, much like Argentina did.

We might already be on our way. Consider the following: A report by The World Economic Forum shows Switzerland has toppled the U.S. as the world's most competitive economy, pointing to the collapse of our banking system as a key issue.

China - which holds lots and lots of our debt - is worried about the U.S. Federal Reserve's policy of printing more money to buy bonds.

One top Chinese official says if the U.S. keeps this up, it will lead to inflation and quote "after a year or two, the dollar will fall hard." That would be on top of the steep declines in the value of the dollar already recorded in the last few years. He suggests that might mean the Chinese will be forced to invest elsewhere.

And a United Nations panel is proposing that a new global currency replace the dollar as the world's reserve currency. The signs are beginning to mount that the mightiest economic engine the world has ever known is beginning to falter.

Here’s my question to you: Is the U.S. headed for Third World status?

END_OF_DOCUMENT_TOKEN_TO_BE_REPLACED

The writing seems to be on the wall for South Carolina Governor Mark Sanford - even if he refuses to read it. There's a growing chorus of voices in that state calling on the governor to just go away. 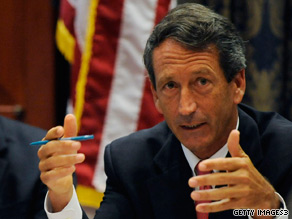 Sanford has been under fire ever since he went MIA for a week in June, lied about his whereabouts, and then resurfaced only to admit he wasn't hiking the Appalachian trail, but was in Argentina visiting his mistress. Since then he's been under investigation for his use of state resources.

The head of the Republican Party in South Carolina is expected to ask later today for a party resolution calling for Sanford's resignation. They voted in July to censure Sanford for "repeated failures to act in accordance" with the GOP's core beliefs. But they didn't ask him to step down then.

This comes just a day after a majority of the Republicans in the state House of Representatives wrote a letter to Sanford demanding his resignation... they say his actions have been "destructive to our state's image on a worldwide stage."

Among the 60 Republicans who signed the letter are several lawmakers who would play key roles in an impeachment process, which has also been talked about.

But Sanford isn't listening.. he called this letter "both unpersuasive and unsurprising," and said he won't be railroaded out of office by his political enemies.

A of couple weeks ago, Sanford also rejected his lieutenant governor's request that he resign for the good of the state.

Here’s my question to you: Why won't South Carolina Governor Mark Sanford go away?

END_OF_DOCUMENT_TOKEN_TO_BE_REPLACED

Should Rep. Wilson be punished for yelling 'You lie' at Pres. Obama?

A Republican congressman from South Carolina made a complete fool of himself during a presidential address to a joint session of Congress last night, and in the process confirmed a lot of what the American public can't stand about politicians.

Nevertheless this was pretty low - even with our reduced expectations for our lawmakers.

Wilson stunned the room... everybody except the president. Republicans froze, House Speaker Nancy Pelosi frowned at him, and Vice President Joe Biden shook his head. But President Obama looked toward the outburst and said "that's not true" and then continued on.

There has been a steady and very noticeable decline in civil discourse in this country over the last few years. The entire month of August was filled with scenes of angry Americans yelling at each other at town hall meetings over the subject of health care reform.

And when a member of Congress yells at the President of the United States, calling him a liar in the middle of an address to a joint session of Congress, we have hit a new low. How do we get to the point where the highest office in the land is treated with such utter disrespect?

Here’s my question to you: Should Congressman Wilson face punishment for yelling "You lie" at President Obama during last night’s address to Congress?