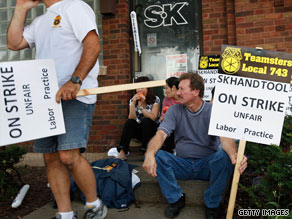 Jim writes:
Labor unions have outlived their usefulness. They pad their members’ paychecks with absurd benefits that nobody else has while holding the employers hostage to their demands. They are the primary reason why so many businesses have chosen to locate outside the country.

Mike from Lexington, Kentucky writes:
The price that was paid for all the benefits being enjoyed by today's retired union workers was the bankruptcy of their employer. No company can afford the outrageous wages and benefits being "earned" by their under-educated and overpaid laborers. Bust the unions, before they bust U.S.

Shaun from Evansville, Indiana writes:
Labor unions were established for a reason - to keep the common worker from being trampled on by big business and the corporate grindstone. If, over the years, they've gotten the power to actually make changes to the system, then I say more power to them. They're working to make the lives of your mother, father, sister, brother, son or daughter better, and I applaud them for that.

Michelle writes:
Yes, unions used to fulfill a useful purpose. Now they mostly justify less work for more pay, reward those who do less, make excuses and have very greedy executives. You complain about Wall Street execs, check out some of the compensation for these union execs, not much different. It's become Chicago politics; they claim to be for the little person or the worker, but ultimately they are only looking out for themselves.

Linda from Arizona writes:
There has been a concerted effort by big business and the corporate-run Republicans to kill support for labor unions in this country, and the unions have played into it nicely with what often can only be called corruption. Nevertheless, they are still the only people who even pretend to care about the workers. I will always be a union supporter.

Noel from Nashville, Tennessee writes:
Jack, It seems to me that the general public opinion of everything has gone down recently. We have become a nation of pessimists and cynics.