Periodic gov't shutdowns a way to save money? 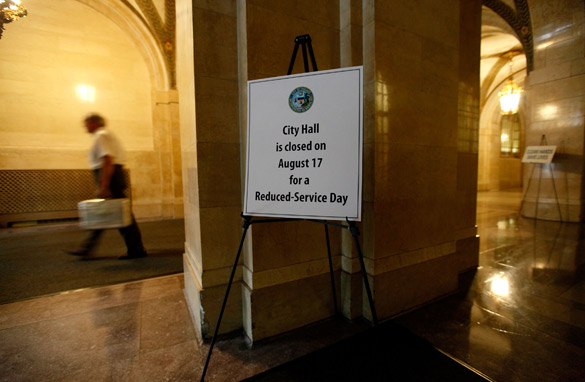 On August 17, Chicago held a reduced-service day. City Hall, public libraries, health clinics and most other city offices were closed in efforts to save money. (PHOTO CREDIT: Scott Olson/GETTY IMAGES)

Rhode Island plans to shut down the state government for 12 days as a way of dealing with severe financial problems.

The plan, laid out by Governor Don Carcieri, is expected to save $22 million in a state struggling with a 12.7 percent unemployment rate and the loss of hundreds of millions of dollars in tax collections as a result of the economic recession.

The plan is for 81 percent of the state workforce to stay home without pay one day a month for 12 months. The first day is scheduled for next week.

The Governor said there is no other option. He said he would consider other ideas if they could also save $22 million. He said the state can't lay off anymore employees since positions were cut last year and he has ruled out a tax increase.

Essential employees, including prison guards and state police, will work on these days.

Rhode Island isn't the first state to make this kind of move. At least 19 other states have furloughed employees or considered doing so in order to survive the current economic crisis.

In Maryland, state employees will be forced to take as many as 10 days without pay and 200 will be fired and left to spend every day off until they can find another job.

And in California, state employees had been forced to take every other Friday off and a third Friday was added to that this summer.

The workload presumably remains the same as people are getting a day less of pay. Probably doesn't do much for morale.

Here’s my question to you: Should periodic government shutdowns become a permanent way to save money?

END_OF_DOCUMENT_TOKEN_TO_BE_REPLACED

President Obama may be on vacation but he and his staff are rolling up their sleeves and getting ready to fight a backlash. This time it's over the skyrocketing national debt. The newest estimates add $2 trillion to the projections made in February and, if accurate, will bring the total national debt to $20 trillion in 10 years. 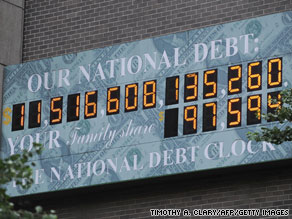 The National Debt Clock in midtown Manhattan shows that the federal deficit has topped $1 trillion for the first time ever and could grow to nearly $2 trillion by fall.

In other words, by the year 2019, the national debt is expected to double and will represent 82-percent of the gross domestic product. Unimaginable, unsustainable, and unacceptable. Those are levels not seen since World War II.

Add in the fact that the President is in the midst of another battle - the one for health care reform. That's expected to cost another $1 trillion over 10 years.

So far, no one has told us exactly how that's going to be paid for. Support for the whole idea has been losing steam in the last few weeks.

Lawmakers from both parties are starting to concede that any bill that doesn't reduce projected federal spending on medical care and start to bring the national debt under control is unlikely to pass.

Some economists insist the two issues should not be linked. They say health care reform is needed now to reduce costs in the long run which would eventually lower the debt.

Pick your poison... Whatever the eventual outcome, September in Washington, DC should be fun to watch.

Here’s my question to you: How will the surging national debt affect efforts to pass health care reform?

END_OF_DOCUMENT_TOKEN_TO_BE_REPLACED

Attorney General Eric Holder has named a federal prosecutor to investigate allegations of torture by the CIA. This coincides with the release of the 2004 Inspector General's report of CIA interrogation tactics including waterboarding, staging mock executions, and threatening suspects with guns, power drills, and the safety of their family members. 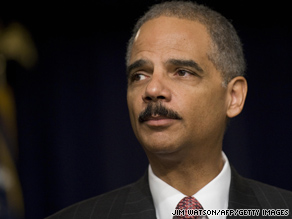 It also mentions moving detainees to prisons in countries where torture is practiced. A redacted version of the report was first released after the ACLU sued last year but clearly the details were in the redacted sections.

This is all happening as the President announced a change in intelligence gathering - shifting the responsibility for terrorism interrogations to the FBI and away from the CIA.

Former Vice President Dick Cheney has said all along the Inspector General's report would prove that interrogation tactics were successful in obtaining useful information from detainees that prevented additional attacks on the U.S. He says we should be praising the people responsible for conducting these interrogations. Cheney is also raising questions about the Obama Administration's ability to protect Americans.

Nine Republican lawmakers have sent a letter to the Attorney General urging him not to launch a criminal investigation because it would jeopardize "security for all Americans, chill future intelligence activities," and could "leave us more vulnerable to attack."

The point of the investigation is to determine if laws were broken. For most people, when a law is broken there are consequences. The question remains whether the people who authorized all this stuff will ever be held accountable.

Here’s my question to you: Is naming a special prosecutor to investigate torture a good idea?