How is the American dream changing?

More good news from our government. Friday the White House said deficits would climb to $9 trillion over the next ten years bringing the total national debt to $20 trillion a decade from now. 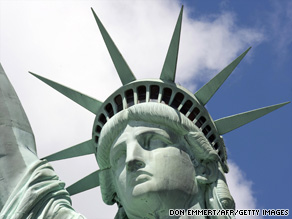 The government also announced Social Security recipients will get no cost of living adjustments during the next two years. That hasn't happened since automatic increases were put into place in 1975. We can find hundreds of billions of dollars for AIG and Wall Street, but we can't give our senior citizens a small cost of living increase in their social security. When does the revolution start?

We're in the midst of a recession not seen since the great depression. Millions of Americans are out of work, unemployment has soared to 9.4 percent. Millions of good paying jobs have been have been shipped overseas never to return. And the manufacturing base that was once the engine of our economy is on life support. We simply don't make "things" anymore.

We are in debt up to our eyeballs to China and other foreign countries as we increasingly look to them to finance out deficit spending. And through it all have you noticed? There's no talk in Washington of cutting expenses or reducing the size of government.

There are unfunded liabilities in the tens of trillions of dollars for Medicare and Social Security; and no plan for how to pay for health care reform. Add in the drain of millions of illegal aliens and the fact that many states are bankrupt. We're in serious trouble here.

Here’s my question to you: How is the American dream changing?

Simon from Orlando, Florida writes:
Very simply, we are losing our freedoms. A quote by Thomas Jefferson, "A Democracy will cease to exist when you take away from those who are willing to work and give to those who are not." The government is coming down harder on the individual achievers that energize the democracy. The idea of rewarding ability is being replaced by the government's concept of "fairness."

J writes:
The corruption of our democratic government, Republican and Democrat, is deep and renders us unable to effectively address the major problems that confront us. Until we have real reform that deals with the power of corporations to buy off our political "leaders", I fear that the American dream will turn more and more into a nightmare. The founding fathers would be ashamed of what has transpired.

Stacy writes:
My husband and I recently have turned 50. There was a time when we both believed that if we delayed gratification, got an education, and were prepared to work hard we could expect to enjoy a small, comfortable life. Instead, we are struggling to: a) support aging family members who have long outlived their retirement incomes; b) continue to fund college age children for whom a bachelor's degree no longer will even get them employment; and c) watch our own retirement disappear while Wall Street gets bailed out over and over. Good thing we really love each other, because that is, apparently, all we have.

Graham from St. Joseph, Missouri writes:
It is changing from the credit-based, assumed "right" it has been for the last decade, back into the savings-based, hard-earned "privilege" it rightfully should be. It is also going to be more difficult to attain than ever before, and there are going to be a lot of Americans who will soon realize that their chances of getting it are just that: A dream.

JM from South Brunswick, New Jersey writes:
The U.S. is gradually receding from a superpower, first world status, and morphing gradually to second (formerly Eastern Europe) or third world status. Eventually the dollar will lose most of its value. Europe, in concert with Russia, and China (with its Asian neighbors) will become the power players internationally. People will still have some quality of life, and successes, but it will take place against that back drop.

David from Oklahoma City, Oklahoma writes:
The best thing to come out of the economic meltdown is a reality check. Buying homes we couldn't afford, running up credit cards like there was no tomorrow. That was an insane way to pursue the dream. So the balloon has burst, and yet this is a golden opportunity for a great reset. The American dream is still alive and well, but perhaps now there will be a dose of realism and common sense. Now people might learn to live within their means.