Best way to put the brakes on bad driving? 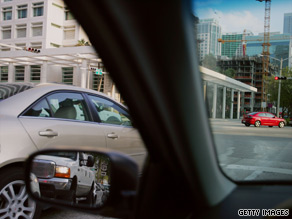 Turns out aggressive drivers may kill more people than drunk drivers... With a recent AAA study finding that things like speeding, tailgating, weaving in and out of traffic, etc. were a factor in 56-percent of all crashes.

So states are cracking down...

In Florida, the worst drivers will have to go back to driving school. A driver who is found at fault in three-crashes over three-years will have to pass a driver's ed course and a road test - just like a beginning driver.

In Georgia, super speeders will be fined an extra $200. This applies to all drivers going faster than 75 mph on two-lane roads - or faster than 85 mph on any road. The new fine is expected to generate $23 million a year - sounds like an idea a lot of states could use to raise some much-needed cash.

In Kansas, the new Right Lane Law makes it illegal to drive in the far left lane, unless you're passing or turning left.

Also - Other states have launched campaigns against aggressive driving trying to reduce road rage; and officers have been targeting drunken drivers, speeders and those not wearing seat belts.

Here’s my question to you: What's the best way to put the brakes on bad driving?

END_OF_DOCUMENT_TOKEN_TO_BE_REPLACED

Should Democrats go it alone on health care?

President Obama and the Democrats may end up going it alone when it comes to health care reform. Democrats say they now see little chance of getting Republican support - and point to lawmakers like Senator Charles Grassley, who they say aren't serious about striking a deal. 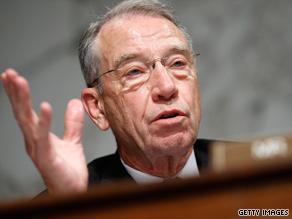 The administration says it had hoped to get bipartisan backing - but it's looking less likely. Instead, they would have to get moderate and conservative Democrats on board.

Party leaders in the Senate may wind up using a tactic where they only need 51-votes to pass a health care bill... instead of 60. One Republican warns if the Democrats go this route - it would be "like a declaration of war."

Going it alone has pros and cons for the Democrats... It could mean crafting the bill they really want. For example, the public option, which the White House appeared to be abandoning this week, would likely be back on the table.

However, pushing legislation through without Republican support could also be risky, as the GOP might call it a power play and say they were merely opposing a bill that the public disliked. One recent poll shows nearly 60-percent of registered voters oppose passing a health care bill without bipartisan support.

But the White House doesn't seem too worried... one official tells CNN "If we have to push it through this way, no one is going to remember how messy it was... a win is a win."

Here’s my question to you: When it comes to health care reform, should the Democrats just go it alone?

END_OF_DOCUMENT_TOKEN_TO_BE_REPLACED

Six months since the Obama administration pushed through the massive $787 billion economic stimulus package. So where are the jobs?

House Republican Whip Eric Cantor says he doesn't think the program is working as well as it was advertised, and says no one should be highlighting the benefits of the plan.

Cantor points out that when this thing was passed - the administration predicted it would keep unemployment lower than 8.5-percent. The jobless rate in July was 9.4-percent.

The White House has pushed back against critics of the stimulus bill - saying it's working as planned - by easing but not erasing the impact of the recession.

They say it will take a "very, very long time" to fill what they call a "very, very deep hole." That's fine… but where are the jobs?

Most economists agree the recession would have been worse without the stimulus... although they don't agree on how much it has helped.

Meanwhile - a new USA Today/Gallup Poll shows most Americans think the stimulus package has cost too much money and isn't doing enough to end the recession.

57-percent of those polled say it is having no impact on the economy or making it worse. 60-percent doubt the plan will help the economy in the future... and only 18-percent say it has done anything to help their personal situation. Not exactly rave reviews.

Here’s my question to you: Why hasn't the stimulus package produced more of a recovery in the jobs market?