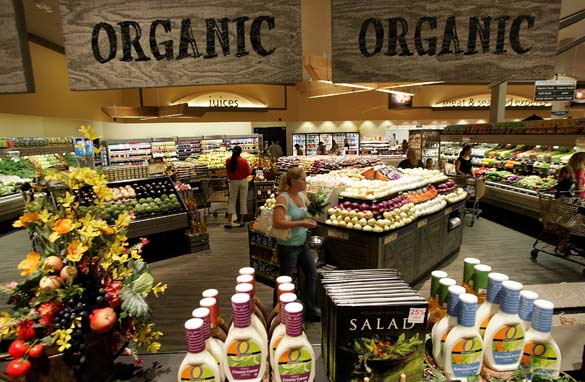 Lynne from North Augusta, S.C. writes:
It means you are ignoring the effects of pesticides on the land and on the animals, the runoff into our rivers and oceans, and the efforts of family farmers over the agribusiness corporations. I'd frankly rather pay more money to the small, responsible farmer. There are too few of them left in America.

John from Topock, Arizona writes:
Another glaring example of how gullible the American consumer is, especially those suave yuppie intellectuals who like to preach about how and what to eat.

Casey from Minneapolis writes:
I'll always be willing to pay more for produce that isn't treated with environment-harming chemicals and for meat that came from animals treated a little more humanely. Not everything is about us, Jack.

Jean from Franktown, Colorado writes:
It means I will continue to shop as I always have, ignoring the organics, but not wondering anymore if I'm making a mistake.

Shelley writes:
I buy organic all the time and I don't usually think it's healthier. I think this study misses the point: the reason most of us buy organic is because we know the food has been grown without pesticides and hormones – and that is healthier, is it not?

Janie writes:
Dear Jack, I don't always buy organic, but I will tell you that when you go into a store here in Oregon that sells organic or even our local supermarket which offers local organic food, it looks way better, smells better and tastes much better.

Jenny writes:
Jack, It means someone is being fleeced, besides the organic sheep, of course.