Should federal government be involved in saving news media?

The news media are fighting to survive - and Dan Rather thinks the government should help rescue them. The former CBS anchorman is calling on President Obama to create a White House commission to help save the press. 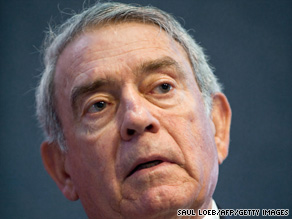 Dan Rather believes journalism has declined to a point that it is time for the government to intervene.

Rather says such a commission could make recommendations on saving journalism jobs and creating new business models to help the industry survive. He says there are precedents for this kind of national commission - which have helped other failing industries.

Rather says the stakes couldn't be any higher. He told the Aspen Daily News: "A truly free and independent press is the red beating heart of democracy and freedom." And he says it's not just journalists who should worry about the fate of the press; but rather every citizen.

He also talked about "the dumbing down and sleazing up" of what we see on the news; and blames that on the blurry line between news and entertainment - along with corporate and political influence on newsrooms. He claims about 80-percent of the media is controlled by a handful of corporations.

Rather also talks about the decline in investigative and international reporting; and says the loss of reporters covering the two ongoing wars hurts our nation.

The bottom line as he sees it: If somebody doesn't step in and take action... the nation will lose its independent media.

Here’s my question to you: Should the federal government be involved in saving the news media?

Jason from Hawaii writes:
Once the government bails out any news source, how could we ever expect that source to be objective? It would just be a version of Pravda-lite.

Buddy writes:
Jack, I've been a working journalist for 30-years. The quickest way to lose an independent media in this country is to have it underwritten by the government. It's the media's job to keep tabs on the government, and a federal bailout would create an unacceptable link that would make our reporting suspect.

CJ from Arkansas writes:
They may have to. If news organizations with strict journalistic standards go by the wayside, what will we be left with? More jokes like Fox News?

George writes:
No need for more subsidies. Like during the dawn of the era of radio, then network TV, then cable, all of which threatened the established media of news reporting, let nature take its course.

Dave from New Hampshire writes:
Yeah, something should be done, but I'm not sure if the government is the one to fix the problem; it's like asking the fox to guard the henhouse. I think the education system should impress on the youth how valuable a free and independent press is and how unimportant stories like what Michael Jackson ate for his last meal are.

Bob from Sterling Heights, Michigan writes:
Accepting money from the government. Now there's a good way to assure a free and independent press.

Nancy writes:
As long as we have your voice and the rest of CNN's amazing talented staff, no government saviors needed here!