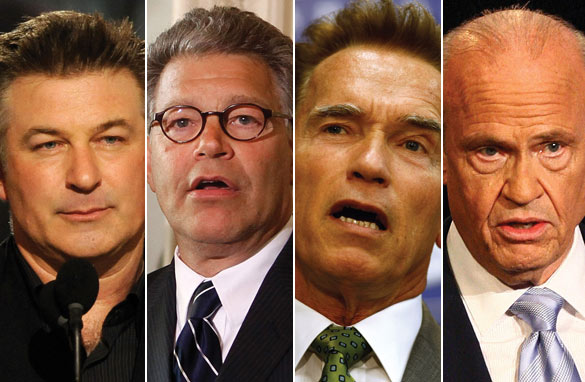 Glen from Sarasota, Florida writes:
Maybe for some Jack, but at the rate we're seeing Republicans run afoul in a variety of ways, there may actually be more opportunities for politicians to find a second career in entertainment. I mean hey, couldn't you just see Mark Sanford star in a Lifetime made for TV movie? Or couldn't you imagine Sarah Palin stepping down as Alaska's Governor to pursue a career in stand-up comedy. You-betcha!

Diane from Barneveld, New York writes:
I think it is a good second career choice because they are at least professionals compared to the amateur actors and comedians in Congress now.

Missy writes:
My problem with most actors/comedians is that most of them are pretty isolated from everyday America. They live in a cocoon. Unless I was convinced that they were out there, talking to people, living the life of an ordinary American, I probably wouldn't vote for an actor, but I know many others would. Just look at California. Voting an actor into the Governor's office worked out well for them.

Larry from Palm Beach, Florida writes:
Why not Jack, actors would be the most quotable interesting politicians anywhere on the landscape. Anyone who writes a book entitled "Rush Limbaugh is a Big, Fat Idiot" can't be all bad. Besides, could Jennifer Anniston or Whoppi Goldberg make any less sense than Sarah Palin?

Donovan from Williamsburg, Virginia writes:
If Baldwin gets elected, I will leave the country and I am sure I won't be alone.

Barry from Lancaster, Ohio writes:
It's all about the team, Jack. Don't forget that it's the writers that make the comedians funny. Put a good team in place, anybody can govern. By the way, who writes your stuff?