What does it say about the GOP in S.C. that they won't call for Sanford's resignation?

The arrogance of South Carolina Governor Mark Sanford knows no bounds apparently. And the hypocrisy of the South Carolina Republican Party doesn't either. In the wake of his admission that he's been cheating on his wife, the state GOP voted to censure Sanford. Which amounts to looking the other way. 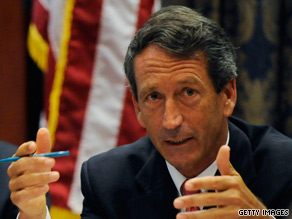 The reason for the censure was his secret travels to Argentina to visit his mistress, which officially translates into what the GOP is calling "Repeated failures to act in accordance with the party's core principles and beliefs."

One of those core principles is family values, except when it's inconvenient. Sanford also refuses to resign on his own, thus joining the soiled ranks of Larry Craig of Idaho and John Ensign of Nevada. Proud Republicans all.

Sanford also gets a slap on the wrist for falling below the standards expected of Republican elected officials. Deliberations reportedly went on for nearly four hours on a conference call and there were multiple rounds of balloting. This patty cake gesture on the part of the Party of family values is meaningless.

Just to be clear, Sanford's own party is saying they don't trust him and don't think he can effectively perform his duties as Governor; but it's okay with them if he continues in South Carolina's highest office. Pathetic.

Here’s my question to you: What does it say about the Republican Party in South Carolina that they won't call for Gov. Sanford's resignation?

END_OF_DOCUMENT_TOKEN_TO_BE_REPLACED

How important are better relations between U.S. and Russia? 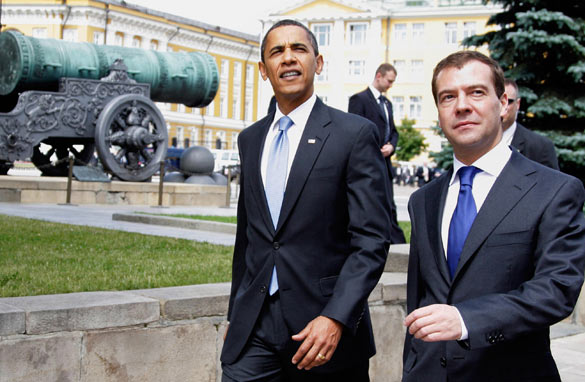 President Obama and Russian President Dmitry Medvedev walk by the Czar Cannon in the territory of the Kremlin. (PHOTO CREDIT: DMITRY ASTAKHOV/AFP/GETTY IMAGES)

President Obama is in Moscow for meetings with Russian President Dmitry Medvedev and Prime Minister Vladimir Putin in an effort to smooth things over between the two countries. It's the latest example of President Obama trying to extinguish the flames of something former president George W. Bush left burning.

In a press conference today, President Obama said a strong Russia is good for the U.S. and spoke of a deep rooted respect Americans have for the Russian people.

Depends on who you ask. According to a Gallup Poll, Americans don't feel much like cozying up to Russia. 53-percent of Americans view Russia unfavorably, the highest it's been in nine years.

Russians aren't in love with Americans either - at least not with our leaders. 34-percent of Russians disapprove of U.S. leadership, which is lower than it's been in previous years. But it's worth noting that many Russians said they are still undecided about their opinion of U.S. leadership under President Obama.

And it's actually better than it was 10-years ago during the unrest in 1999 before Boris Yeltsin conceded power to Putin. Then Russians' opinion of American leadership was at an all time low.

Here’s my question to you: How important are better relations between the U.S. and Russia?