How does Gov. Palin's resignation affect her chances for 2012?

Once again, Sarah Palin has made her way back into the headlines. This time it's her abrupt announcement made late Friday afternoon - of a summer holiday weekend - that she intends to quit her job as governor of Alaska effective at the end of July. 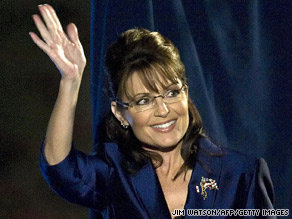 She called the press conference at the last minute and even her closest aides say they were unaware of the news and don't know what will come next. Critics and supporters alike are perplexed and no time was wasted starting the debate over whether this is a move to position herself better for a Presidential run in 2012 or if she's throwing it away by quitting.

Palin - who was thrust onto the national stage as John McCain's running mate against President Obama - defended her decision as a move to avoid becoming a lame duck.

Love her or hate her, Sara Palin was able to electrify the conservative base of the party like no other Republican in the country. This was not good news for the GOP, which is already reeling in the wake of the sex scandals of Senators John Ensign of Nevada and Mark Sanford of South Carolina.

Time for the spin doctors once again to try to come to the rescue and explain why what Sarah Palin did was a good idea. Good luck with that. Real conservatives don't quit.

Here’s my question to you: How does Governor Sarah Palin's resignation affect her chances for 2012?

David from Texas writes:
If I quit my job at a smaller company, wait until 2012 and then go down the street to the larger company, I am not going to get the job, either as an hourly worker, Manager or CEO. She ended her political career.

Larry from Georgetown, Texas writes:
I was always taught that "when the going gets tough, the tough get going," in all areas of life. It is when things are tough that the true character is exposed and in her case she is a quitter and always will be. Regardless of her political aspirations, her goose is cooked. Maybe now the people that supported her will realize how fortunate we are that she isn't one heartbeat away from being President.

David from Virginia writes:
It depends on who you ask. I don't think it drastically hurts her chances of being the Republican nominee, especially among the rapidly thinning field, but it makes being a viable national candidate nearly impossible.

Diane from Allentown, Pennsylvania writes:
Something's very wrong with this picture Jack. She's not finishing out her current term, and not running again. Somebody got something on her and I don't think it's going to be pretty. Think about it Jack, if these guys aren't resigning after playing footsies in bathroom stalls, and having a "friend" in Argentina, what the heck could she have done?

Jeff from Hawaii writes:
Jack, Who cares? Caribou Barbie has shown consistently that she is not only unaware of the nuances of both Global and Domestic policy, she is unwilling to learn. To end her term early because the job is too hard or too demanding just shows she is in over her head.