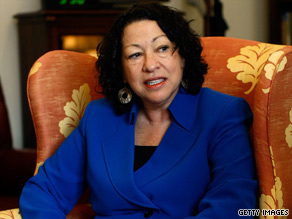 David from Alexandria, Virginia writes:
I hope that this will provide some allowance for senators on both sides of the aisle to examine the basis for her decision, one which the SCOTUS seemed to feel gave an almost cursory glance on a critical and increasingly complex issue – an issue that will come up more frequently in the years ahead.

Ann from Sulphur, Louisiana writes:
Considering that four justices agreed with her decision, those who would use this to try to keep her off the court will have a hard time. She should still be confirmed.

Richard writes:
This will not affect her confirmation. Short of a major scandal involving a celebrity, the confirmation process will move forward with people aligned on the right or the left as always. Towing the party line is more important to Americans than independent thought and the analysis of a legal career.

Martin from Shoreline, Washington writes:
It will likely result in more intensive questioning about her racist and sexist views, but I doubt it will derail her nomination. Liberals think it is perfectly ok to discriminate against white males. I guess they view it as payback for the sins of history. Hence, they will confirm her.

David from Springfield, Missouri writes:
If she made this decision on something so clear-cut then I am no longer a fan of hers. It’s so obvious how these men were denied; they did absolutely nothing wrong. And if she couldn't see that, or didn't want to see that, it would be a big mistake to put her on the court.

Raoul from New Orleans writes:
"Republicans say the Supreme Court’s decision raises issues about her ability to serve on the high court." This from the gang who allowed Harriet Miers to even get nominated?