How should U.S. respond to Iran’s election controversy? 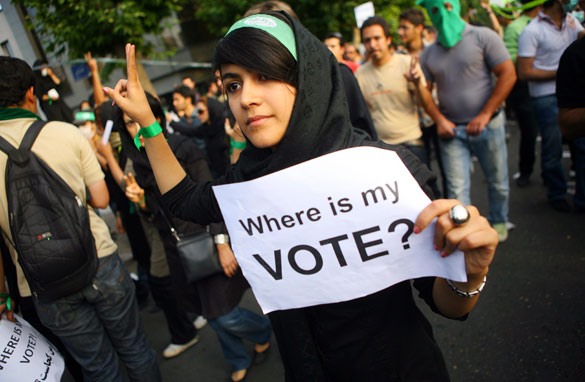 President Obama is walking a fine line when it comes to the controversy over Iran's election.

After several days of a cautious response from the White House - the president came out yesterday saying he was deeply troubled by the violence he was seeing on TV and that free speech and the democratic process need to be respected. Nonetheless, he said he wants to respect Iran's sovereignty and that it's up to the Iranian people to decide who their leaders are. Mr. Obama said he's not trying to dictate Iran's internal politics.

Critics are calling on the president to be stronger in his support of the Iranian protesters. House Republican whip Eric Cantor says the administration's "silence in the face of Iran's brutal suppression of democratic rights represents a step backwards for homegrown democracy in the Middle East." Senator John McCain has called the election corrupt and says President Obama should speak out that this is a fraud election.

Also, other foreign leaders have been more forceful in their condemnation, but experts acknowledge that President Obama is in a no-win situation... strong criticism could backfire, while a muted response gives an impression of weakness.

Also, while the president's message of change matches with that of the Iranian protesters - a young and tech-friendly bunch, much like his own campaign... the president doesn't want the U.S. to become the story in Iranian politics.

Adding to the pressure on Washington was the move by Iran today to severely restrict journalists' access to the protest rallies. That has raised speculation the government plans a violent crackdown... on the order of what happened in Tiananmen Square 20 years ago.

Here’s my question to you: How should Washington proceed when it comes to Iran's election controversy?

Adam writes:
I believe Washington should remain quiet for the time being. The entire world is watching and knows what Ahmadinejad is up to and that the election was rigged. Eventually the truth will surface and if the violence continues, Washington together with the UN should make a clear statement to Iran.

Niousha from San Diego writes:
Dear Mr. Cafferty, I am a proud Iranian-American. What I think many fail to see is that the Supreme Leader, his council and Ahmadinejad are not people to have a dialogue with. The fact that they are blocking the news media and sending the militia to attack the protesters shows that freedom will never be a right in Iran under this government. We must learn from history and the past, we cannot sit idly by and wait and see innocent young men and women being massacred. Please, Mr. Obama, please help my people.

Ali from Vancouver writes:
Hi Jack, Being an Iranian who is in touch with the protesters in Iran, I can tell you that the last thing they want is the United States taking sides. Ahmadinejad would love the U.S. to call fraud on the elections so he can convey his argument that the West is trying to weaken Iran and take advantage of his resources. That argument has been a successful one for 30 years in the regime and it is one that would rally all the clerics who are now undecided under Ahmadinejad.

Vincent writes:
Democratic dissidents now risking their lives to oppose Iran's sham democracy get no support from the Obama administration. What has happened? Where is America’s grand quest of liberating this world from its evil autocracies? I smell similarities with the man who messed it all up in the first place, don't you? Is Obama the new Jimmy Carter? History in repeat.

Mitch from Minneapolis writes:
The administration should respond exactly as they are doing, announcing their concern but not interfering. If there is truly to be another Iranian Revolution, it must be done by the Iranian people.