Would you rather listen to Palin or Gingrich make a speech?

Sarah Palin didn't make a speech - but that didn't stop her from stealing the show at a big Republican fundraising dinner in Washington last night. The Alaska governor's appearance was a question mark up until the last minute... and followed weeks of an on-again, off-again saga. 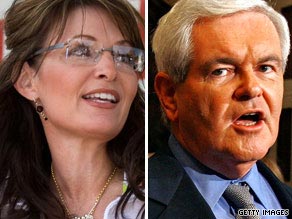 Palin had originally been announced as the keynote speaker, but her office said she never confirmed the attendance. Later they wanted to know if she would speak at the dinner; party leaders said she could but then took back the invitation... worried that Palin would upstage Newt Gingrich, the new keynote speaker. Lots of drama.

But Palin, along with her husband Todd, got big cheers from the audience when they were introduced onstage last night; and their table was the only one in the ballroom with a crowd around it.

Several Republicans thanked Palin for showing up. Senator John McCain said it was great to see her, Senator Jon Cornyn praised Palin's leadership, and Gingrich said the U.S. "would be amazingly better off" had McCain and Palin been elected.

There's been speculation that both Gingrich and Palin might be interested in running for the White House in 2012. A recent poll among Republicans showed 21 percent backing Palin and 13 percent backing Gingrich.

Here’s my question to you: Would you rather listen to Sarah Palin or Newt Gingrich make a speech?

Karen from Charlottesville, Virginia writes:
Jack, While I don't particularly like Newt Gingrich, he's quite intelligent and does make some thought-provoking comments, as opposed to Palin, who simply makes provocative comments! I find her sole mission to be one of creating division – in the party and in the U.S.

Sally from Midland, Michigan writes:
They both turn my stomach, frankly, but I would be much more likely to sit through a speech by Gingrich than a rehashed Gingrich speech spoken by Palin.

Deboroah writes:
Definitely Sarah Palin. No one else comes close when it comes to concocting word salad. Ms. Palin is endlessly entertaining.

Jacki from Tampa, Florida writes:
I've been a Republican all my life and I have to admit I'd rather stick needles in my eyes. Please, please tell me there is someone out there who can bring this party back from its deathbed!

Jimmie writes:
I would rather see Palin speak. Even though Democrats love to make fun of her, she is a young free-spirit and that's what the Republicans need right now – a young, motivational speaker. Gingrich, on the other hand, is a washed-up politician who is unpopular with the core of Americans. I'm not saying Palin's the best choice for the GOP to nominate in 2012, but she'll do better to revive the party then Newt ever will.

Marie from South Carolina writes:
Makes no difference; they're reading off the same script.

Kisha writes:
I watch them every day on the Jerry Springer show.

Dann writes:
That's like asking, “Who do you think is the best hockey player in Ecuador?” It's not much of a choice. If given a third option, I would rather trim my nose hair with a carrot scraper.