Why does the GOP have such a narrow appeal?

Here's something that probably keeps the leadership of the Republican Party up at night: A new Gallup poll shows 89 percent of the party's rank-and-file members are white. 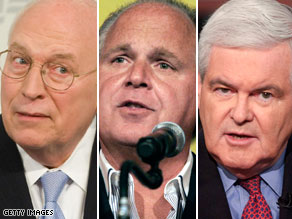 This leaves only 11 percent of Republicans who are Hispanics, African-Americans or members of other races. These numbers are staggering and hardly in keeping with the radically changing face of the U.S.

That's not all - by more than two-to-one, whites who call themselves Republicans claim a conservative ideology, and about half of them say they're strongly religious.

Compare that to Democrats - whose party is 64% white and 36 percent non-white. By a ratio of more than four-to-one, white Democrats call themselves moderate or liberal, and only 20 percent of them say they're highly religious.

Independents land somewhere between the two camps - with 27 percent non-whites.

These numbers pretty much say it all about the GOP's troubles; and leave little question why Democrats are in control of the White House and both houses of Congress.

The big question: Will the support of white, conservative, religious Americans be enough of a base for Republicans to start winning elections again? Probably not. The alternative is for Republicans to find a way to broaden their appeal among non-whites and whites who are more moderate.

And here's a hint: The way to accomplish that is probably not with the likes of Dick Cheney, Rush Limbaugh and Newt Gingrich slinging around negative and hateful rhetoric.

Here’s my question to you: Why does the Republican Party have such a narrow appeal?

Nancy from Lincoln, Nebraska writes:
Let's start with the fact that the only demographic group they seem interested in are rich white guys. In today's economy, that's a rapidly declining base. Throw in immigrant bashing, gay bashing, anti-evolution tirades, and lack of concern for the environment. Finally, the so-called macho men have to continuously apologize to Rush Limbaugh for daring to offend him and you've got a brand no one wants to buy.

Larry from Santa Monica, California writes:
On the long Republican watch that just ended, we've witnessed the simultaneous collapse of both our economy and our stature as a leading nation in the world community. People need a little time to forget, and the current spokespeople seem intent on not letting anyone forget. There's nothing wrong with historical revisionism as a tactic. It's the timing that seems a little goofy to me.

Howard from Bolingbrook, Illinois writes:
The Republican Party's doctrine is very hoarse as it relates to the little person in this country. It is also the party of intolerance and racism, hidden behind and within the veneer of religion. Jack, can you tell me one thing the Republicans have done for the little guy or any minority group over the last 50 years? I can't think of anything.

Robert from Atlanta writes:
It’s really very simple, Jack. They had lack of vision and incompetence; remember Sarah Palin? Eight years of chaos and bias against the poor. The Republicans have earned every bit of our contempt.

Braden from Brookings, South Dakota writes:
You mean it's not on purpose? The way they pride themselves on kicking moderates out of their party, I thought that was their intention.