Is the government getting too involved in the auto industry? 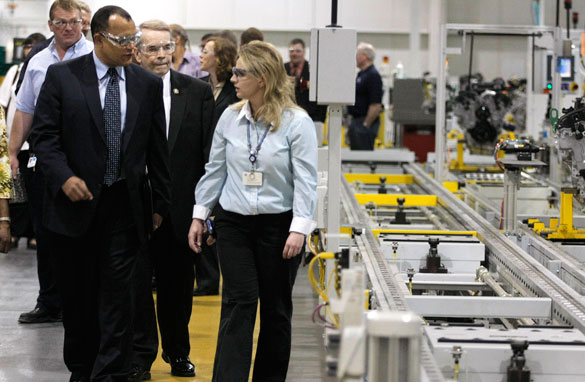 When it comes to restructuring the auto industry, the Obama administration is knee-deep.

General Motors is expected to follow in the footsteps of Chrysler, and file for bankruptcy in the coming days. It would be the largest industrial bankruptcy in U.S. history.

G.M. says a committee of bondholders has agreed to a new deal offered by the government. It would erase GM's unsecured debt in exchange for company stock.

If the deal goes through, the government – which has already lent GM close to $20 billion – could have a 72% stake in the company and provide billions more in financing for General Motors to keep operating while being reorganized.

The administration's goal for G.M. is to return to profitability. The White House reportedly wants to play "as minimal" a role and "exit" the investment as soon as they possibly can. But the risks for taxpayers are huge, when you consider U.S. auto sales are near their lowest level in 27 years.

Not everyone is sure the level of the Obama administration's involvement is a good idea.

A poll taken in Michigan by Detroit News/WXYZ shows 42% of those surveyed say the president's role has hurt the domestic automakers, while 39% say he's been helpful.

Here’s my question to you: Is the government getting too involved in the auto industry?

Rosemary from New York writes:
There will be no auto industry if Obama doesn't step in. Previous administrations had conflicting interests and blocked fuel efficiency, mileage requirements, etc. This is the last hurrah, and Obama is the first president to step in.

Greg from Cabot, Arkansas writes:
The auto industry will be ok as long as the government plays the role of a referee and stays out of design and procurement. I don't want to see a "multiple-use-transportation-system" vehicle with an $800 toilet seat that needs to be repaired with a $300 hammer.

Robert from Florida writes:
The government should not be involved AT ALL in the auto industry… Has anybody though about that fact that government intervention in "private" corporations is what is causing this mess and making it worse? Let bad businesses do what they would normally do in the normal business world: fail. Let other businesses take their places.

Peter writes:
No, it is not. The auto companies screwed up long ago. They were out of sync with the environment, customer needs, and energy efficiency and were driven by selfish greed. The government is refocusing them now that they face bankruptcy. They need adult supervision.

Steve from Florida writes:
Personally, I think the American companies had every opportunity to avoid the ditch they're in. As we speak, I'm watching GM and Chrysler dealers close down while they're building a brand new VW dealer on the same block. Corporate heads should be rolling somewhere in this process. This situation was all due to pure negligence and lack of foresight by management.

Remo from Austin, Texas writes:
Yes, it is. I really don't want to deal with "Obama Motors.” Frankly he's the last person I'd want to buy a car from.