What will it take for Americans to embrace idea of gay marriage? 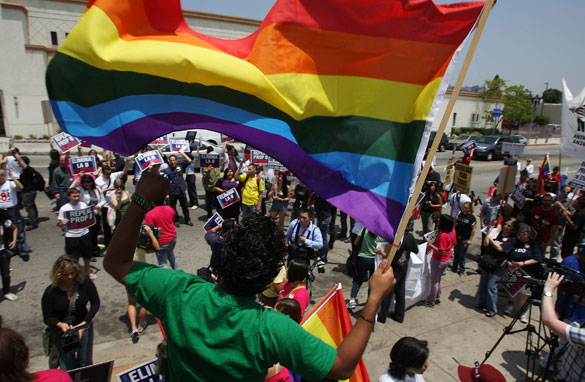 A majority of Americans continue to oppose gay marriage by a margin of almost 3-to-2.

A new U-S-A Today – Gallup Poll shows 57% of those surveyed are against legalizing same-sex marriages, while 40% are in favor. Although support for gay marriage has increased a lot since the 1990s, it seems to have stalled in the last few years - peaking at 46% in 2007.

Not surprisingly, the poll shows Democrats and younger Americans are more likely to support gay marriage than are Independents, Republicans or those older than 30.

But, what's interesting is that although a majority of Americans are against gay marriage - most people are willing to support gay rights in a lot of other areas. For example, the same poll found: 69% are in favor of gays and lesbians serving openly in the military, 67% say gay domestic partners should have access to health insurance and other employee benefits and 73% say they should have inheritance rights. 67% favor expanded hate-crime laws to cover crimes committed against gays.

Meanwhile, California won't be joining the list of states where gay marriage is legal. The state's Supreme Court has upheld a voter-approved ban on same-sex marriages.

Gay marriages are now legal in Massachusetts, Connecticut, Maine and Iowa, and will be legal in Vermont in September. The District of Columbia has voted to recognize gay marriages performed elsewhere although it doesn't give marriage licenses to gay couples.

Here’s my question to you: What will it take for Americans to embrace the idea of gay marriage?

END_OF_DOCUMENT_TOKEN_TO_BE_REPLACED

Any signs in your life that economy is turning around?

Some people who know a lot more about the economy than most of us think things are about to start looking up. 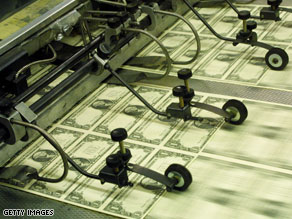 A new report by a group of leading economists says the recession should end in the second half of 2009,although it will be a more moderate recovery than what typically happens after a major downturn.

The report by the "National Association for Business Economics Outlook" also forecasts:

– The nation's gross domestic product will turn positive in the third quarter. It experienced its biggest decline since 1957 during the first half of this year.

– When it comes to real estate, most of the panelists expect home sales to bottom out by the middle of this year and a majority say housing starts will bottom at the same time.

– As for consumer spending, an overwhelming majority of these economists say "more thrifty behavior is here to stay, at least for the next 5 years"

Speaking of a 5-year outlook, more than half of the economists say they expect the potential growth of the economy to be between 2 and 2.5% in that time.

But enough of what the experts say, millions of ordinary Americans have been hit hard by the recession, and we want to know if things are getting any better from where you sit.

Here’s my question to you: Do you see any signs in your day-to-day life that the economy is turning around?

END_OF_DOCUMENT_TOKEN_TO_BE_REPLACED

Republicans are in yet another tough spot – this one when it comes to the confirmation of Judge Sonia Sotomayor to the Supreme Court of the United States. Chalk up another brilliant bit of political strategy to our new president.[cnn-photo-caption image= http://i2.cdn.turner.com/cnn/2009/images/05/27/art.sotomayor052709.gi.jpg caption="Judge Sonia Sotomayor would be the first Hispanic U.S. Supreme Court justice if confirmed."]

President Obama's nominee would be the first Hispanic justice - and only the third woman justice - in the history of the nation's highest court.

Conservative critics are branding her as a liberal activist judge, and are pointing to her past comments. In 2001, Sotomayor said, "I would hope that a wise Latina woman with the richness of her experiences would more often than not reach a better conclusion than a white male who hasn't lived that life."

Rush Limbaugh calls Sotomayor a "reverse racist" and "an affirmative action case extraordinaire” who puts down white men in favor of Latina women.

But the White House is defending the judge's comments, saying taken in context, what she says is "very much common sense in terms of different experiences, different people.”

Another comment getting attention came in 2005 when Sotomayor said, "a court of appeals is where policy is made.”

Republican senators say she will need to prove her commitment to impartiality, but RNC Chairman Michael Steele warns that if his party hopes to include more Hispanics, they have to be careful about how they approach Sotomayor.

The bottom line here is barring some unforeseen scandal, Sotomayor's confirmation will likely sail through the Senate with Republicans afraid to challenge it for fear of alienating Hispanic voters.

Here’s my question to you: Will Republicans dare to vote against the first Hispanic woman nominated to the U.S. Supreme Court?