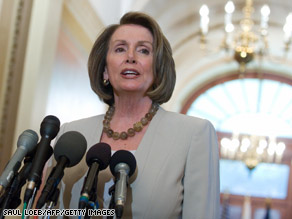 John from Virginia writes:
We see a stuttering, stammering Speaker whose story keeps changing vs. an organization dedicated to pursuing terrorists and keeping our nation safe that has been clear and consistent in its story. The simplest explanation is that Speaker Pelosi failed to disclose that she had been briefed that these techniques were being used as early as 2002 and assumed no one would call her on it. To believe otherwise is to purport a massive conspiracy in the entire CIA.

Martha from Alabama writes:
I believe Pelosi. Let's look at the ramifications: Pelosi is from a liberal district and won't have any problems getting re-elected. Even if she knew about it, by law she couldn't do anything about it except write a letter which would be ignored by the Bush admin. Those at the CIA, however, can and should be prosecuted for torture and war crimes.

Gordon from Albuquerque, New Mexico writes:
Quote: "Meanwhile Pelosi finally admitted she learned waterboarding was being used in 2003." She knew about the waterboarding at the very beginning of the Iraq war. And for six years she kept silent.

Joe writes:
Jack, You have to look at both parties involved and see which one changes their story. The CIA has not changed in the slightest, but Pelosi's story changes as time goes on and more facts come out. So, my answer is Pelosi is lying like a rug.

Star from Auburn, Ohio writes:
What the hell? We are on a witch hunt using Nancy Pelosi as the scapegoat for waterboarding when the commander-in-chief was the one ordering it. Have we lost our minds? Why is she the criminal in this case when it was Bush and Cheney who authorized the torture of these people?

Doreen writes:
Ms. Pelosi is the Democrats’ worst nightmare. They need to get her out of there before she brings down the whole Obama administration. I would not believe her if she said the sky was blue.