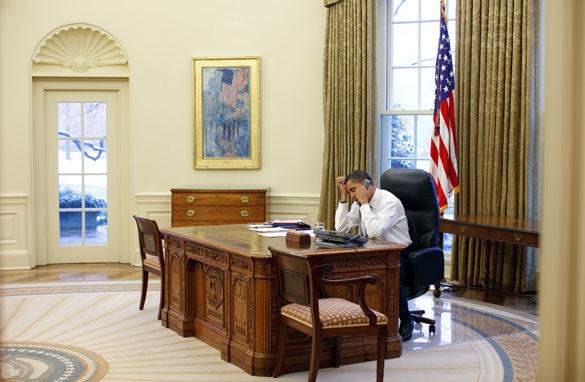 The president has seen the photos and said they're not particularly sensational compared to images from Abu Ghraib. (Photo by Pete Souza/White House via Getty Images)

President Obama says he doesn't want to release alleged prison abuse photos because it could affect the safety of U.S. troops overseas and "inflame anti-American opinion."

And it wouldn't exactly be the best timing for the president himself, who is scheduled to soon go to Egypt and address the Muslim world.

Nonetheless, the decision is a reversal for the White House - which last month said it had no problem with the Pentagon releasing hundreds of pictures of detainees in Afghanistan and Iraq.

But after hearing concerns from military commanders, the president says releasing these images could have a "chilling effect" on further investigations of detainee abuses - without adding to the understanding of past abuses.

Mr. Obama, who has seen the photos, says they're not "particularly sensational" when compared to the images from Abu Ghraib. And he repeated that any future abuse is unacceptable and won't be tolerated.

Needless to say, the decision isn't sitting too well with many of his liberal supporters. Some groups are accusing President Obama of violating his promises of openness and transparency; and of sounding just like the Bush administration when it comes to claims of secrecy.

Democrats were split - some backing the president's decision, while others think he should release the photos. Meanwhile top Republicans applauded President Obama.

It's unclear what will happen, but the matter could wind up in the Supreme Court, since two lower federal courts have ordered the pictures be released.

Here’s my question to you: Should the alleged detainee abuse photos be released?

President Obama is doing the right thing, Jack. By not releasing the photos, he's putting the decision into the hands of the court. The court can then order the photos released and President Obama can be clear of having to take yet another hit from the likes of McConnell and Boehner.

As a security expert in the I.T. arena, we follow like gospel the fundamental idea that "security through obscurity never works." Examples abound of people trying to protect the masses by hiding information and examples abound of why it almost always fails to meet that goal. The way to get problems solved is to publicize them, not hide them.

As long as they also show the photos of the people who had to jump from the World Trade Center, of the planes crashing into the Twin Towers and Pentagon, of the people who were on all the flights that crashed, etc. Then I don’t have a problem with the torture photos. I’m sure that most people would say to you that these people were not tortured enough.

Yes, otherwise we will die the death of a thousand cuts, as the situation drags on. Exposing the situation to the light of day will allow it to be put behind us.

Lou Dobbs’ poll last night said 87% of the audience was against the photos being displayed. I have no problem with that. But the notion that only a small group of people are to blame is simply not true. We know Cheney is not shooting his mouth off for fun. He's scared of going to jail.

No. Why are we always second guessing the president? Give him a break. And while I'm ranting, I wish we'd stop taking those ideologue positions of liberal and conservative views on everything.

P.S. – I'm a radical liberal Democrat myself but pledge to give that up right now.