Damaging for Republicans to keep criticizing each other publicly?

Add Mike Huckabee to the growing list of Republicans publicly taking one another down as they fight for the soul of the party. The former Arkansas governor and presidential candidate is blasting some GOP leaders. 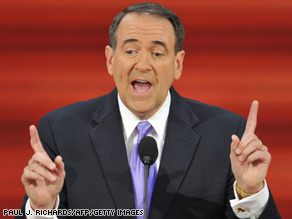 "It's hard to keep from laughing out loud when people living in the bubble of the Beltway suddenly wake up one day and think they ought to have a listening tour; even funnier when their first earful expedition takes them all the way to the suburbs of Washington, D.C."

Huckabee is referring to the National Council for a New America, formed by folks like Jeb Bush, Mitt Romney, and John McCain. Their first meeting was held at a Northern Virginia restaurant.

Huckabee also suggests the party is at risk of becoming as "irrelevant as the Whigs" if it moderates its policies. That sounds a lot like what Dick Cheney and Rush Limbaugh have been saying. These right-wingers are not helping the Republican Party to portray itself as more moderate and inclusive.

Huckabee's a lot more likable than Limbaugh or Cheney, but the message is just as shrill; and at the end of the day... it seems like Republicans are self-destructing without any help from the Democrats.

Meanwhile speaking of the former vice president, his daughter is picking up right where he left off. Liz Cheney suggests President Obama appears to be siding with terrorists for agreeing to release photos showing alleged abuse at U.S. prisons in Iraq and Afghanistan during the Bush administration.

President Obama has now ordered government lawyers to object to the release of these photos because he says it could endanger our troops.

Here’s my question to you: How damaging is it for the Republicans to continue to criticize each other publicly?

Bob from Indiana writes:
I view it as amusing and it confirms that the Republicans have no direction or leadership. A three party system may very well emerge from the fall of the GOP.

Bizz from Quarryville, PA writes:
I remember a line from "The Godfather" that every now and then you have to have a war to get rid of the bad blood. I think this is what is happening now in the Republican Party. But, if the end result is Rush Limbaugh, Newt Gingrich and the rest of the bad blood still pumping through the party's veins, then their party is doomed.

Stefan writes:
Very damaging. You would think after their tough defeat last November that they'd come together. I guess they haven't learned their lesson. They have no clear leader because everyone wants to be that person. If this continues, we can expect the Democrats to maintain power in 2010 and Obama to get re-elected in 1012.

Missy writes:
I actually don't think it's damaging at all. It's time for the Republicans to weed out their weakest links. It would be a lot worse to pretend there were no problems in the party.

Chuck from Toledo, Ohio writes:
Republicans can continue to argue, yell and scream at each other. They can send out all the high-profile Republicans they want to "listen" to people and gather ideas. But they won't get anywhere until they retrieve their soul from the religious kooks they sold it to many years ago.

Carl writes:
Jack, My party always wants to tout Reagan. Well rule number 1 they forgot was, "Thou shall not speak ill of another Republican." I mean, really, how bad is it if we make the Democrats look well-organized?