Do you believe Pelosi when she says she wasn't told about torturing prisoners?‬‪

There's a new chapter in the saga over who knew what - and when they knew it - when it comes to the ongoing torture debate. The Obama administration just released records that show House Speaker Nancy Pelosi was briefed in September 2002 about the enhanced interrogation techniques that had been employed against al Qaeda prisoners. Past tense - had been. 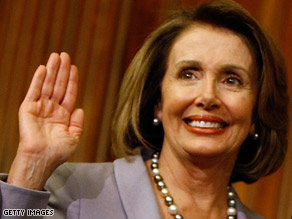 House Speaker Pelosi maintains she was not told that so-called enhanced interrogation techniques were used.

The documents don't list the specific methods covered during that briefing. However, during the preceding month, the CIA apparently waterboarded Abu Zubaydah at least 83 times.

This doesn't exactly match what Pelosi has been telling us. Pelosi has previously acknowledged being briefed on the CIA's program, but says she only knew about methods they were considering - not about ones they actually used.

As recently as a week ago, Nancy Pelosi said: "We were not - I repeat were not - told that waterboarding or any of these other enhanced interrogation methods were used."

With the release of these new records, Pelosi came out with a carefully worded statement: That she had been briefed only once; she was told the techniques were legal but that waterboarding had not yet been used.

Republicans have been accusing Democrats, like Pelosi, of hypocrisy for getting all outraged about torturing terror suspects - and calling for investigations. They say the Democrats have known about it for years and are only now causing a row because suddenly the information was made public.

Here’s my question to you: Do you believe Nancy Pelosi when she says she was never told about torturing prisoners?

Michael writes:
Yes, I believe her. The prior administration only thinks they told Congress what they were doing. My guess is they used so many weasel words that no one, except for maybe Karl Rove, had any clue what they were being told. When the administration systematically lied about everything, why would anyone believe they told the truth in this case?

D. from Atlanta writes:
No Jack, I don’t believe Pelosi. Because of the public outcry over torture, she is now doing what is expedient (a little C.Y.A.). She knew and did not have the backbone or political will to stand up and say something.

Bill from South Jersey writes:
Jack, No, I don't believe her. But that's not the point. Debating this in the media isn't how we should be proceeding. We really need an open, frank investigation conducted by a special prosecutor as to exactly what went on and who knew about it. I'm disappointed with the Obama administration in not supporting such action.

Robert from Fayetteville, Arkansas writes:
If I have to choose between believing Nancy Pelosi or the people who sold the war in Iraq, I think I'll give the benefit of the doubt to Pelosi.

Ed from Chicago writes:
I'm disinclined to believe Pelosi. Although I'm sure she has always opposed torture, I strongly suspect that she feared the political blowback of speaking out against it in the post-9/11 culture of those years. Now that it's politically safe, she's trying to say the right thing, and hoping not to be exposed.

K.C. from Ohio writes:
Jack, I wouldn't believe Pelosi if she said tomorrow was Saturday. Her time is up.