Minnesota still hasn't decided the outcome of its Senate race more than six months since Election Day, and the stakes are higher than ever. With the defection of Arlen Specter from the Republican Party, Minnesota's race takes on a whole new meaning. 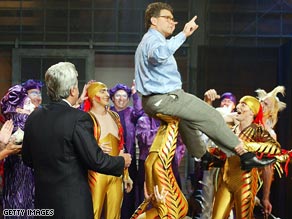 Franken with Cirque du Soleil performers during a 2003 appearance on 'The Tonight Show' with Jay Leno.

If Al Franken wins, he'll become the 60th Democratic senator and the party will have a filibuster-proof majority. This would likely help President Obama get through his upcoming Supreme Court nominee along with big initiatives like health care.

Vice President Joe Biden met with Franken this week and said the administration looks forward to working with him once Minnesota's Supreme Court issues its final ruling. That's where the race is now tied up.

A three-judge panel ruled Franken is the winner, but Norm Coleman won't go away. He has asked for a recount of at least 1,300 ballots. Coleman is trailing Franken by 312 votes. Coleman's appeal could go all the way to the U.S. Supreme Court; even though some in the Republican Party concede it's not looking good for him.

By all accounts, it seems likely that Al Franken - a former comedian who appeared on Saturday Night Live and a former liberal radio host - will win. One Democratic consultant and a friend of Franken says it's ironic for a comedian to carry so much power, but "Franken is certainly comfortable with irony."

Here’s my question to you: What does it mean that a comedian will determine the balance of power in the U.S. Senate?

Steven from New Jersey writes:
If he were just a comedian, I'd be worried. However, if you have read his books on politics and life in the U.S., you would find that he has a good handle on what the problems of this nation are and what needs to be done to fix them. Behind all the jokes is a smart man.

Chris from New York writes:
Well, Jack, I believe we need people from all walks of life in Congress. Too bad it doesn't happen much! Also, most great comedians are pretty smart, so it's not a bad thing. Jim Carey, Bill Cosby, Steve Martin, Will Farrell, Chris Rock, Jerry Seinfeld, Ellen DeGeneres… they're all thinking folks.

Arlene from Roselle, Illinois writes:
I always thought of the Congress as the Ringling Brothers of Washington, only without the funny noses.

Lisa from Shelton, Connecticut writes:
It means Franken will have intimate access to far better material than ever before.

Stan from California writes:
Hi Jack. It's fine with me since 99% of comedians such as Jay Leno, Bill Maher and Jon Stewart are far more intelligent than 99% of the politicians. Palin is a governor, need I say more?

Billy writes:
Jack, The Republican clowns didn't do so well, so let's try a Democratic comedian.

Michael from Arlington, Virginia writes:
Jack, I would take a comedian over the jokers and thieves we have on Capitol Hill right now. It's time to fire all the appeal lawyers and give Minnesota their Senator.

Sylvain writes:
That's great: a body builder, a wrestler and now a comedian in office. All we need now is a grumpy, bald TV show host.