Jeb Bush says it's time for Republicans to leave the Reagan era behind them and look forward. The former Florida Governor insists the party's ideas need to be "forward-looking and relevant" instead of dwelling on the nostalgia of the good old days. He's also acknowledging how well President Obama's message of hope and change resonated with the voters during the election. 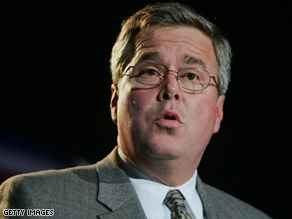 Cafferty: Jeb Bush could perhaps regroup the GOP… if only his brother weren’t considered by many to be responsible for the party’s downfall.

Jeb Bush - who's part of the Republicans' new effort to reconnect with voters - is right about all this stuff, but here's the problem: He's the brother of the man who could very well be more responsible than anyone else for the downfall of the Republican Party.

Jeb Bush's name has been mentioned as a potential presidential candidate in 2012; but it seems hard to imagine that the American people would go for that... again.

Meanwhile Former Georgia Congressman - and former Republican turned Libertarian - Bob Barr says it's hard to "overestimate the damage" that's been inflicted on the GOP. He says the party lacks "any coherent philosophy, vision or leadership."

And Meghan McCain, daughter of John McCain, continues to speak out about this stuff too; she says the party needs to become more inclusive if it wants to rebuild and attract younger voters. As things stand now, Meghan McCain says Republicans tend to look down on moderates such as her, saying: "Get rid of the dirty moderates."

So, as the Republican Party continues to search for its voice and a leader...

Here’s my question to you: Is Jeb Bush the right person for Republicans to listen to at this time?

The GOP is isolated to one region of the country: the South. Those good ole boy ideologies no longer work in an America that is progressing toward a center-left future. I’m a black conservative who for years has said our party needs to be inclusive of all creeds and backgrounds. Now we’re a dying breed and everyone wants to listen… Bashing our president is the wrong way to find our way back to the top. Meeting him in the middle is the only way.

It's funny how the Republicans can recognize that Americans liked Obama and his message of change, yet the GOP still has a hard time showing any of it! I mean here’s their list of leaders for change: Jeb Bush, Newt Gingrich, Mitt Romney, John McCain. Seriously? When the conservatives said that they don't believe in Darwinism and the idea of adapting to survive, they weren't kidding! Goodbye, GOP.

Jack, no. The future leader of the Republican Party is not born yet.

Jeb is probably the best of all the Bushes. Had his brother not been president, Jeb probably would have held that office for two terms and been very popular. "W" may have ruined his chances of ever becoming president.

This only proves how much gall the Bushes have, or perhaps how out-of-touch they are about how little this country thinks of their family. No more Bushes, ever!

Doesn't it bother you when the brightest of the Bush family is named "Jeb"?