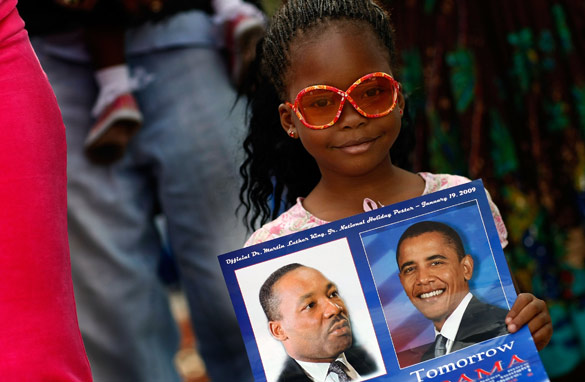 100 days into office, the history Barack Obama made in becoming this country's first African-American president hasn't been lost.

It's something that Mr. Obama rarely talked about on the campaign trail - or since he's taken office - but it is a subtle part of his larger message of change; and may have already improved race relations in this country.

When asked a question about his historic presidency at his last press conference, Mr. Obama said that at the inauguration there was "justifiable pride on the part of the country that we had taken a step to move us beyond some of the searing legacies of racial discrimination," but then added, "that lasted about a day."

But these poll numbers suggest otherwise. One white woman polled in Indiana - a Democrat - says since the election she's noticed "people of different races being kinder to each other." A Republican white woman in Kansas City says Mr. Obama's openness and acceptance has helped others act the same way. A black Democratic woman in Ohio says with Obama as president, whites and blacks seem to be working toward the same goals.

Here’s my question to you: How has President Obama affected race relations 100 days into office?

END_OF_DOCUMENT_TOKEN_TO_BE_REPLACED

Republican Party on brink of irrelevance?

Senator Arlen Specter's defection to the Democratic Party is just the latest bad news for the Republican Party. Politico suggests the GOP's meltdown is the worst of any party's in decades and has left the Republican party on the brink of irrelevance with few obvious paths back to power. 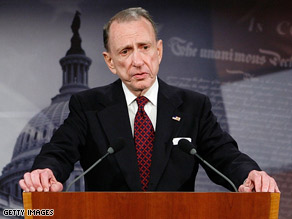 Sen. Arlen Specter announced yesterday that he would switch from the Republican Party to the Democratic Party.

Specter's abandonment comes in the same month as a traditionally Republican leaning district in upstate New York tipped for the Democrats. This means in the nine Northeastern states - there are only 15 GOP House members out of 83 seats - and only three Republican senators out of 18.

On a national level, the GOP is near record levels for unpopularity. Only about one person in four identifies himself as a Republican; and a new CNN/Opinion Research Corporation poll shows only 39 percent of those surveyed have a favorable view of the Republican party. Even a lot of Republicans no longer like the party much.

Some Republicans say conservatives have left the GOP with an exclusionary message. Senator Olympia Snowe says, "you certainly haven't heard warm encouraging words of how they view moderates. Either you are with us or against us."

Meanwhile Specter's switch to the Democrats is less than genuine. As recently as March 17, the Pennsylvania senator insisted he would never switch parties. But once the polls indicated he would lose his bid for re-election, he jumped on the Democrats' bandwagon like a bird on a worm. This is called hypocrisy.

Here’s my question to you: Is the Republican Party on the brink of irrelevance?