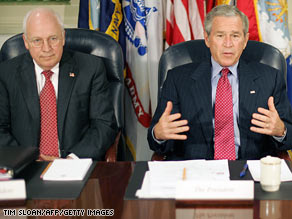 Raymond from Charlotte, North Carolina writes:
Bush has probably "lawyered-up" and his lawyers have told him to remain silent on everything until the smoke settles from his administration's disastrous policies.

Adam from Thousand Oaks, California writes:
My guess is: he is at peace with the decisions he's made and believes they are no small part of what has kept our country safe since 9/11/2001. I agree with John McCain that it is a slippery slope when we start prosecuting people for their political views and interpretations.

Jay writes:
Because Bush knows that he is not as smart as Cheney. And when he hears how absolutely stupid Cheney sounds when he tries to defend this nightmare, he understands how much dumber he will come off if he opens his mouth.

Lesley writes:
I was never a fan of George W. Bush. I would love to write something not so nice about him. However, in the case of torture, I have always believed that it was Cheney who was pushing all the torture buttons, along with his pal Rumsfeld. Cheney feels the need to defend himself, and Bush has nothing to defend.

Jack from Nice, California writes:
Jack, Who cares? I spent over eight years wishing President Bush would remain silent, so now I just want to enjoy it while I can.