What about Pres. Obama's second 100 days? 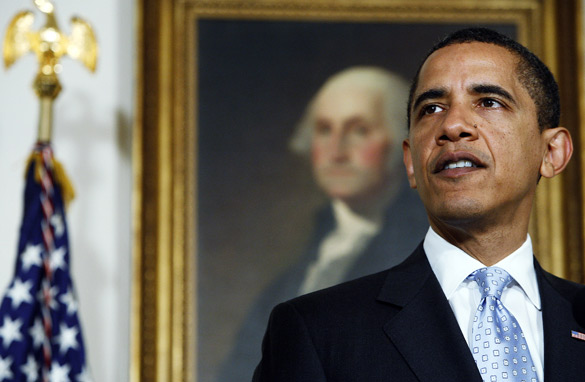 The consensus is that President Obama's first 100 days in office have been very successful. But the outlook for the next 100 days may not be nearly as rosy. The president's first three months in office focused, among other things, on the economy, reaching out to world leaders and winding down operations in Iraq while ramping them up in Afghanistan.

But despite job approval ratings of about 65 percent - not exactly chopped liver - there is criticism. Conservatives say President Obama hasn't worked for real bipartisanship, while some Democrats are worried about bailouts of big financial institutions and car companies as well as with his plan to increase troop levels in Afghanistan.

CNN's John King points to three things that could trip up the president in the days to come: First, he's perceived as a liberal, which is often a liability in U.S. politics. Nearly 4 in 10 Americans think Mr. Obama is trying to do too much at once; and if there are major setbacks, the risk is voters will question his leadership and governing skills.

In the next 100 days - look for some new issues to take center stage, including the president's push for health care reform along with energy and environmental proposals. It's yet to be seen if the American public will back Mr. Obama's push for more government intervention in these areas. But if the current poll numbers are any indication, Mr. Obama's honeymoon is far from being over.

Here’s my question to you: How are President Obama's second 100 days likely to be different from the first?

Gia from Los Angeles writes:
The actions that President Obama has taken in his first 100 days will begin to show fruit during his second 100 days, allowing him to tackle more. But expect continued (if not amped up) criticism from the right in an effort to negate the perception of the incredible advances being made.

Dee from Florida writes:
I'd say that all depends on several things: 1) Whether he is able to fill the rest of his jobs with taxpayers (I mean, people who have actually PAID their taxes). 2) Whether any of those corporations or banks that have been bailed out actually start paying back some of OUR money. 3) Whether the Taliban gains control of the nuclear arsenal in Pakistan. 4) And most important to me, whether my husband, after being unemployed for nearly a year, GETS A JOB!

David from Tampa, Florida writes:
On the international side of things, Pakistan and China will become more prominent. South America will start getting deserved attention. International economic as well as domestic economic issues will dog the administration. How to turn our economy around without breaking the bank will continue to be the central concern at home. Republicans will entrench as the "loyal opposition" and if there is any bipartisanship left it will completely gone in the next 100 days.

Dave from Arizona writes:
I would expect things to slow down as the energy of his arrival gives way to "politics as usual." Though he's shown a remarkable ability to cut through that, its heavy hand will weigh down on him more.

Michael from Portland, Oregon writes:
I don't think he will be smiling as much. I don't think the Republicans are going to lie down and die either.

Ali from North Dakota writes:
Jack, Exhale. This country is so impatient. While there is a lot that needs tending to, each has its time and place. Pres. Obama is doing just fine, and I really wish the media would go fishing or something. RELAX!!! We're in very capable hands.