A week from today will mark President Barack Obama's 100th day in office. And whether you agree with him or not - it's fair to say that the president has been one busy guy. According to one report - a top White House aide says of the 100-day marker: "This isn't Biblical. You don't do 100 days and rest," but acknowledges that President Obama's first 100 days have been the most productive since FDR's. 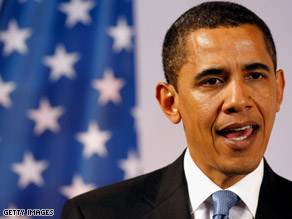 First 100 Days: What has been President Obama's greatest accomplishment?

Here's only some of what's been on the president's plate:

– When it comes to the economy: the passage of the $787 billion economic stimulus bill, the bank bailout plan and housing recovery measures.

– Setting a fixed timetable for withdrawal of combat troops from Iraq and ordering an additional 21,000 troops to Afghanistan.

– Ordering the closing of Guantanamo Bay prison and ending the use of so-called "enhanced interrogation techniques."

– Meeting with leaders around the world, promising a new era of American leadership and cooperation.

And there's no indication Mr. Obama plans to slow down any time soon. The White House often speaks of his top goals of reviving the economy, health care and energy. And then there's education, immigration, tax reform. and on and on...

But some wonder if by trying to do so much, the president could wind up accomplishing little.

Here’s my question to you: As he prepares to mark his first 100 days in office, what has been President Obama's greatest accomplishment?

President Obama's greatest accomplishment (as a result of the actions you've listed) has been restoring hope to the American people. There is a sense of optimism, even in these troubled economic times.

On January 20th, President Obama escorted George W. Bush out of town and thereby made the world a safer place to live. Any other good deeds will only come second to that on a list of great accomplishments.

His greatest accomplishment so far has got to be the stimulus package. Getting that through Congress was a pretty big deal.

His biggest accomplishments: 1) Creating the biggest deficit in the history of this country. 2) Ensuring that the next two to three generations will have a reduced standard of living. 3) Doing nothing to ensure the safety of our borders. 4) Creating the legacy of even bigger government.

I think his greatest accomplishment has been to not allow himself to be bogged down by all of the conservative attacks. He's been the thoughtful, insightful and rational leader we needed years ago. By keeping his head on straight and his agenda clear ahead of him, picking off projects one by one, he's done well to keep us calm and collected when all seems to be falling apart.

Jack, Take it from an Australian: President Obama's greatest accomplishment so far is restoring American leadership around the globe. You have an American president the rest of us are proud to call the leader of the free world.

Finally selecting a dog for his daughters.