A majority of Americans see big government as a greater threat than big business... A new Gallup poll shows 55 percent of those surveyed are concerned about big government; but that number is down from 61 percent in 2006. 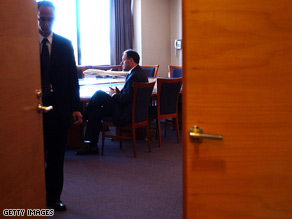 Meanwhile 32 percent of Americans say they're worried about big business; and that number is up from 25 percent three years ago. Only 10 percent view big labor as the greatest threat; that number hasn't changed much since 2006.

The poll also shows partisan differences. No big surprise here... More Republicans now view big government as the most significant threat to the country than did 3 years ago. And the same goes for Democrats who see big business as a bigger threat. Independents' views didn't change much over this time. More of them say they're concerned about big government.

Gallup suggests these numbers show that the change in administrations from Republican to Democrat - along with the government's actions to stabilize failing companies and try to right the economy - have not caused the fear of big government to grow beyond what it was last year.

Meanwhile failing banks, CEOs that jet around on corporate planes to beg Congress for handouts, and companies that blow taxpayer money on things like bonuses and lavish parties without a second thought... these have probably not helped the image of big business.

Here’s my question to you: Which is a greater threat: big government or big business?

Alex from Seattle writes:
Both, in cooperation, are the threat. Corporate money funds politicians who then vote to let the corporations regulate themselves. Lack of regulation allows the greedy to make huge profits without personal responsibility which strains the existing system and yields more money to buy more politicians. Meanwhile, the system collapses and people wonder why.

Jen writes:
The financial oligarchy is the greatest threat to our country. Big banks should be nationalized, broken up, cleaned up and resold.

Jesse writes:
Jack, It seems pretty clear cut to me. It was big business that got us into this mess by becoming "too big to fail." So now we need big government to get us out. We need to somehow find a happy medium to balance the two once this crisis of the millennium is over.

David from Maine writes:
Big business, without a doubt. Big government still has to answer to the people come election time and if we don't like what they are doing we can vote for someone we think will do better. Big business only answers to its board of directors, all of whom are only interested in what makes them richer in the end.

Jim from Chicago writes:
Definitely big business. We have now seen the economic devastation that results when corporate greed goes unchecked without adequate government regulation. The Wall Street foxes are sitting on the front steps of the empty hen house picking their teeth while we poor suckers are left to pay for their feast.

Mike from Denver writes:
Our government is the biggest business around, so what is the difference?