Iran is warning Israel not to attack its nuclear facilities - with one top official saying if Israel attacks, "Iran will respond in a way that they will not be able to sleep easy anymore." This warning comes a day after Iranian President Mahmoud Ahmadinejad raised tensions between the two countries, calling Israel the "most cruel and repressive racist regime" at a UN conference in Geneva. 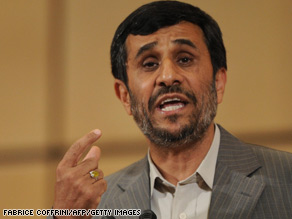 Iranian President Mahmoud Ahmadinejad is pictured at the UN review conference on racism in Geneva. EU delegates walked out of the conference after Ahmadinejad launched a verbal onslaught against 'cruel' Israel.

Israel, which is now being led by Prime Minister Benjamin Netanyahu's hardline government, says Iran is developing nuclear weapons that could threaten its very existence. Last week Israeli President Shimon Peres dismissed the idea that Israel is planning any kind of attack on Iran's nuclear facilities.

But The London Times reports the Israeli military is getting ready to do just that. They say Israeli forces have acquired special aircraft that would be required for the strikes, and are practicing missions to simulate an attack. The newspaper also reports there will be two nationwide drills to help the public prepare for any potential retaliation.

One senior defense official tells the Times that Israel wants to know they could strike Iran within a matter of days or "even hours" if given the green light. It's believed Israel would need to hit more than a dozen targets, including moving convoys.

The same official adds that it's unlikely Israel would bomb Iran's facilities without getting at least tacit approval from the U.S. Vice President Joe Biden recently told CNN that Israel would be "ill-advised" to attack Iran.

Here’s my question to you: Israel is reportedly getting ready to attack Iran's nuclear sites. Should they?

END_OF_DOCUMENT_TOKEN_TO_BE_REPLACED

How would you regulate the credit card industry?

Something else to add to President Obama's ever-expanding to-do list: regulating the credit card industry. The president and his chief economic adviser, Larry Summers will meet tomorrow with executives from some of the top credit card issuers. The administration has vowed to crack down on high interest rates and predatory lending practices it says contributed to the economic crisis. 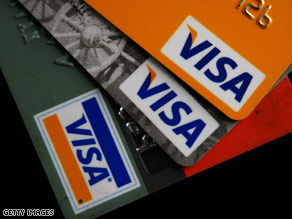 Many lenders have raised credit card interest rates significantly as the recession drags on; which means defaults and delinquencies have shot up. Consumer groups are especially critical of companies who raised rates on existing card holders while they were getting federal bailout money.

Meanwhile the House Financial Services Committee is looking at a bill that would call for clearer labels on credit card offers - almost like what's used for food. In the Senate, Chris Dodd is calling for stricter federal oversight that would say when lenders can raise rates and would prevent rate hikes in certain instances.

The Federal Reserve passed new rules that limit some credit card rate increases this winter, but they won't go into effect until July 2010.

It's no surprise that the banking industry is pushing back; they want the White House and Congress to wait until the Fed's new rules go into effect before taking any other action. And that's more than a year away. Lobbyists for the credit card industry argue that if the measures are too tough they could end up restricting the flow of credit to consumers and blocking the economic recovery.

Here’s my question to you: How would you regulate the credit card industry?
Interested to know which ones made it on air?

END_OF_DOCUMENT_TOKEN_TO_BE_REPLACED

Those hotly debated Bush era interrogation memos include this little nugget: CIA officials waterboarded two al Qaeda suspects 266 times. Interrogators waterboarded Abu Zubaydah at least 83 times in August of 2002; and they used the tactic against Khalid Sheikh Mohammed, the self-described planner of the 9/11 attacks, 183 times in March of 2003. That's about six times a day. 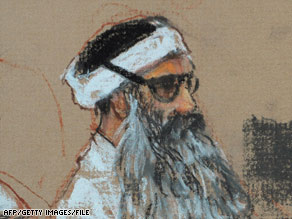 Khalid Sheikh Mohammed, seen in a December sketch, was waterboarded 183 times in a month, a memo says.

These memos show waterboarding was used more frequently and with a greater volume of water than CIA rules allowed. Time magazine suggests the use of the tactic seemed to "occasionally get out of control." Don't you wonder what they learned from Khalid Sheik Mohammed the 183rd time they waterboarded him that they didn't know after waterboarding him 182 times?

In an about-face today, President Obama opened the door to the possibility of criminal prosecution for former Bush officials who authorized this stuff. He says it will be up to the attorney general to decide whether or not to prosecute them. Up until now, the president insisted there would be no investigation of those who ordered the torture, or those who carried it out.

The president's reversal comes a day after Senator Dianne Feinstein - whose Intelligence Committee has started a closed-door investigation into all of this - urged him to stop making public promises not to launch criminal prosecutions related to the interrogation program.

There is also pressure coming from the United Nations, which says the U.S. has signed the international Convention Against Torture and is therefore required to investigate and prosecute any credible allegations of same.

Here’s my question to you: Does waterboarding two members of al Qaeda 266 times constitute a crime?