"By no means are we out of the woods," said President Obama in a warning to Americans regarding the economy. In a speech today, the president once again talked of "glimmers of hope," yet balanced that by saying there's no doubt that times are still tough. 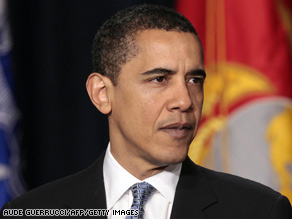 Despite economic woes, the U.S. majority places its trust in the president.

President Obama says a full recovery depends on a new foundation for the economy. He also blamed politics as usual and the media for making the situation worse. Nonetheless, even as President Obama warned that tough economic times and choices lie ahead, it looks like he has a majority of the country behind him.

We're talking here about people who are specifically tasked with fixing the economy, yet the president rates much higher.

Mr. Obama also kills the Republicans on this issue. A new CNN-Opinion Research Corporation poll shows more than twice as many Americans say the president has a clear plan for solving our economic problems than Republicans in Congress - 58 to 24 percent.

Not even Republicans are confident in Republicans - only 36 percent of them think the party's leadership has a clear plan.

Here's my question to you: How much confidence do you have in President Obama to fix the economy?

Liz from Los Angeles writes:
I have tremendous confidence. After all, this whole mess is at least in part a crisis of confidence, and he positively exudes confidence. Even if you don't like his policies, you've got to respect that he's doing an excellent job at not making us more skittish than we already are, and not trying to pull the wool over our weary eyes.

Jack from West Virginia writes:
With all this big government, I believe we are heading down the path to fascism. I don’t have much faith in what this president is doing.

Conor from Chicago writes:
I don't have confidence in anybody fixing the economy.

Brad writes:
With the economy starting to perk up, I think that Obama's plan is already starting to work. The Republicans, as always, are just clueless.

Sentell writes:
Anybody with a brain can see that we are in better shape now since the Obama team started doing what is necessary to fix the economy.

Pete from New York writes:
As a productive member of the economy (part of the minority which actually pays income taxes) I have no confidence in the Democratic plans. Obama's out-of-control spending over the coming years will prevent private industry from generating jobs and now we hear that as of NEXT year the Social Security receipts go into deficit and the shortfall will have to be made up out of general revenue. The outlook is not good.

Sly from Alpena, Michigan writes:
Ask me this same question 3 years from now, and you'll have my answer.