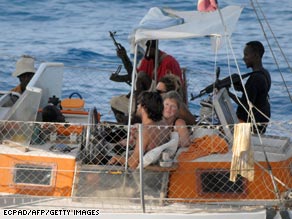 Billy from Las Vegas writes:
Jack, Two things will solve the problem quickly. First, put armed guards with the firepower to blow the pirates out of the water on the merchant ships. Second, halt any suspected Somali "mother ship" trawler for inspection. If they refuse to be inspected, sink 'em. No "mother ship" and the pirates have no way to get to the deep water Indian Ocean shipping lanes. That leaves the Gulf of Aden in the north which is a lot less area to patrol.

Charles writes:
The threat of violence has always been what pirates have used to intimidate shipping management. It’s interesting that these criminals take umbrage at us when that same violence is visited upon them. Until shipping owners refuse to pay ransoms and demand actions from their own governments, piracy will continue.

Matt writes:
I believe the U.S. Navy should use what appear to be easy targets for pirates, but in reality would be decoys with armed soldiers instead of civilians. If pirates know that such things exist they will be more reluctant to charge at unsuspecting vessels.

Alberto writes:
Jack, We have air marshals that go in planes. We should do the same with ships. A contingent of armed security personnel will become a deterrent. If it comes to a confrontation, our weapons and training are superior. For piracy to take place, you need a pirate and a vulnerable ship. All you need to do is take one element out of the equation.

Brian from New Creek, West Virginia writes:
When piracy was a problem centuries ago, the British would hold public executions of pirates. "Hang 'em high!" as they used to say... we probably wouldn't hang them but a more public show of force against pirates would make them realize the benefits do not outweigh the risks.