Does press have better things to cover than Obamas' new dog? 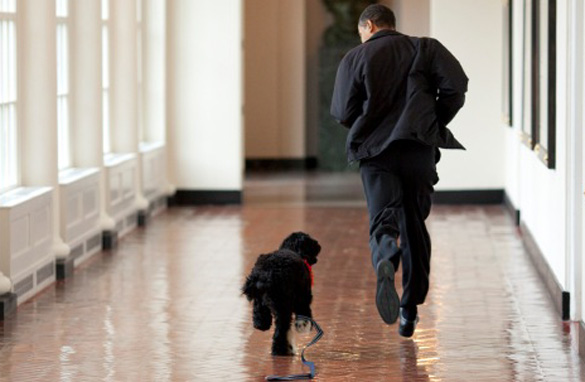 It may just be the most closely followed campaign promise made by President Obama... we're talking about the puppy he promised his two young daughters. And the media are all worked into a frenzy now that the long-awaited news is officially out...

The Washington Post reported in a front page story yesterday that the Obama girls were getting a six-month-old Portuguese water dog - a gift from Senator Ted Kennedy. The Obama girls named it "Bo." The puppy is due to arrive at the White House tomorrow - although the First Family and "Bo" have already met.

The Post insisted it was supposed to have the exclusive on the story, but word leaked out ahead of time. Several web sites got fired up about the news - with one publishing a photo on Saturday of what it claimed was the new first puppy. The White House called that photo a fake.

We're talking about a puppy here. But it seems like the American people - and by extension the media - can't get enough of the Obamas, especially their personal lives. Where will the girls go to school? What designer is the first lady wearing? Has the president quit smoking?

Nonetheless - it's not like the media don't have enough to focus on... you know, the struggling economy, the wars in Iraq and Afghanistan, the Somali pirate hijacking and on and on.

Here's my question to you: Should the press have better things to do than cover the story of the Obamas' new dog?

Christine from Edmeston, New York writes:
The first family's dog stories are charming and sweet. What's the harm? It is positively refreshing to have occupants of 1600 Pennsylvania Avenue who truly captivate the American people in a good way. Let us enjoy it. None of these occasional diversions deprive any of us of the horrible affairs of the world. The press is hardly asleep at the wheel.

Chris from New York writes:
With all the gloom and doom we've been hearing for nearly a year over the economic crisis, we could use some light moments like the news on the Obamas’ family dog and the event that unfolded off the coast of Somalia yesterday. For all work and no play makes Jack a dull boy.

Nora from Texas writes:
I am a great supporter of President Obama, have been for a long time. This particular story made me roll my eyes. We have so many other important things to be discussing in the media, this should not be one of them. It is a light-hearted story, I know that. But come on everybody, enough is enough.

Bertha writes:
Jack, There are two precious little girls in the White House now that are getting their first puppy. IT'S A HAPPY STORY. We need happy stories sometimes, especially now. Don't you think?

Jackson from Rome, Georgia writes:
Of course they do, but what are the American people going to tune into? A story about gloom and doom in the economy or a story about 2 little girls getting a new puppy? My money's on the puppy.

Stephen from Herndon, Virginia writes:
My dog relieved himself on the floor while I was at work. When should I expect the camera crew?

Sally writes:
You're one to talk! You're on the TV all the time – at least the dog isn't ugly!

Iris from Saugatuck, Michigan writes:
The insanity of prioritizing all this puppy press over legitimate news stories is enough to give one PAWS.