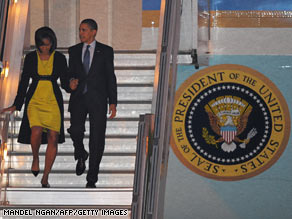 Mariah writes:
Based on history's view, America has only realized its creed of freedom and justice for all a select few times. The Emancipation Proclamation and Civil Rights Movement were a few examples. As the leader in democracy and liberty, America finally has a leader who can back up its promise.

Julia from Newton, New Jersey writes:
I don't think we're out of the woods just yet. It's going to take a lot of time and effort to bring us back to where we once were, but I think President Obama will get us there (or close) just fine by the end of his term.

Mari from Salt Lake City, Utah writes:
Finally, we have a president who we can be proud of, one who is articulate and follows the rule of law both at home and internationally. And can speak English!

Ed from Athens, Georgia writes:
The moment that President Obama was sworn in on Jan. 20, America's image in the world changed for the better. My wife and I were Americans in Paris in 2007, but Parisians treated us well. Must have had something to do with the "Impeach Bush" button I was wearing.

Don from Naples, Florida writes:
We are a more bankrupt, morally defunct nation. America's position in the world is declining as is its superpower status. Obama is trying to gain allies for America's fall. Hopefully Obama can gain enough support so the buzzards circling over this nation’s head don't devour us in our weakened state.

Mike from California writes:
I think that the world might now see there is intelligent life in the U.S.

John from Houston, Texas writes:
Dear Jack, It's too early to say anything yet. But, just in case, let's keep everybody barefoot over there at the G-20 meeting. We don't need any flying shoes at this point.